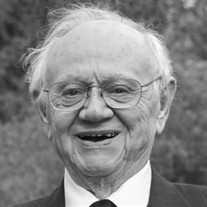 David F. Louden Sr. died Sunday at home after completing most of the items on a bucket list he compiled when diagnosed with pancreatic cancer 18 months previously. He was 87. He was born at home to Robert John Louden and Hildred Irene Louden in Bisbee, N.D., in the midst of the Great Depression. He was the youngest and last surviving of eight children. The family moved to Tucson, Ariz., when he was in junior high school. David moved to Portland, Ore., in 1946 and attended Franklin High School, where he met Vivian Jeanne Brasesco. They were married in 1950, following graduation. He and Vivian raised their family in Salem beginning in 1956. They returned to Portland in 1975 and moved to North Albany in 1989. As a high school student, he worked full-time at Fred Meyer in Portland and knew Mr. Meyer personally. At the age of 20, he became one of the first appliance dealers to sell television sets in Oregon, then became a Pillsbury representative covering much of Oregon. He came to be known as the Pancake King for the demonstration pancake feeds that grocery stores used to put on for customers. He then became a general contractor and built more than 200 houses in the Aloha and Lake Oswego areas. He ostensibly retired in 2004, but continued to do construction and remodeling for friends and family until his death. He was a long suffering Beavers fan, missing games only when he was so upset with their last performance that he couldn’t bear to watch the following game. However, he was convinced that most of their difficulties were the product of poor officiating and was generous in offering his critique of their calls to the television set during games. At times, he traveled with the team and was of a friend of Dee Andros. He was proceeded in death by Vivian and was her constant companion and caretaker for the last two years of her life, and he later carried on the role of family cake baker in her honor. They are survived by six children: Jeanene, David Jr., Gail, Joyce, Andrew, and April Spring, and by 12 grandchildren, four great grandchildren, and 42 nieces and nephews. A celebration of his life is planned for June 2019, near his birthdate. (He hated the cold rainy Oregon winters.) In lieu of flowers, he would have appreciated donations to Patient Access Network Foundation, which assisted Vivian with care (https://panfoundation.org/index.php/en/donors/ways-to-give).

David F. Louden Sr. died Sunday at home after completing most of the items on a bucket list he compiled when diagnosed with pancreatic cancer 18 months previously. He was 87. He was born at home to Robert John Louden and Hildred Irene Louden... View Obituary & Service Information

The family of David Frank Louden Sr. created this Life Tributes page to make it easy to share your memories.