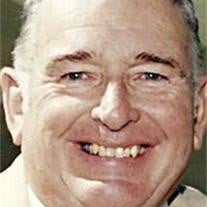 David Wynne MacManiman died Friday, Jan. 6, at his home in Corvallis, following a traumatic brain injury suffered from a fall. He was 81. Dave was born in Baker to Wynne and Beth Ashley MacManiman. His parents worked the family farm near Halfway. He attended schools in Halfway and Portland and graduated from Joseph High School in 1949. As a young man, Dave worked for the Lazy-T Dude Ranch as a guide in the Eagle Cap Wilderness. He entered the U.S. Navy in 1949, attended Navy Sonar School, and was stationed on the USS Walker DDE-517, attaining the rank of Petty Officer 1st Class. After his discharge in November 1953, Dave attended Multnomah College in Portland, where he studied electronics. He joined the Oregon State Police on June 15, 1954, and served in Baker and Reedsport before moving in 1968 to Corvallis, where he was Station Commander until his retirement on Jan. 1, 1983, with the rank of lieutenant. After retirement, he worked for the Shutterbug camera stores in Corvallis and Albany, owned and operated Beaver State Photography, and worked part time for Wilson Motors from 1986 until 2004. Dave was a life member of the National Rifle Association, the Good Sam RV Club, the North American Hunting Club, the American Association of Retired Persons, the Boy Scouts of America, the Rocky Mountain Elk Foundation, the Varmint Hunters Association, and Corvallis Elks Lodge No. 1413, where he was active in rifle range activities. He loved photography, bird watching, bicycling, camping, scouting and hunting. He received several civic awards, including Conservationist of the Year from the Oregon State Society of the Daughters of the American Revolution, the Benton District Scouting Award of Merit and Scouting’s Oregon Trail Council Silver Beaver Award. He is survived by his wife of 61 years, Charlene Warnock MacManiman; daughters Valerie MacManiman of Springfield, Audrey Reddington of Randle, Wash., and Angela Porterfield of Bend; son David C. MacManiman of Baker City; brother, Robert MacManiman of Coos Bay; sister, Shannon Gibbs of North Richland Hills, Texas; seven grandchildren; seven great-grandchildren; and several nieces and nephews. The Oregon State Police Honor Guard will conduct services at 1 p.m. Saturday, Jan. 14, at the Benton County Fairgrounds auditorium. His ashes will be placed at a later date at Prairie Creek-Joseph Cemetery in Wallowa County. In lieu of flowers, the family requests that memorial contributions be sent to the Nature Conservancy or the National Parkinson Foundation.

David Wynne MacManiman died Friday, Jan. 6, at his home in Corvallis, following a traumatic brain injury suffered from a fall. He was 81. Dave was born in Baker to Wynne and Beth Ashley MacManiman. His parents worked the family farm near... View Obituary & Service Information

The family of David MacManiman created this Life Tributes page to make it easy to share your memories.