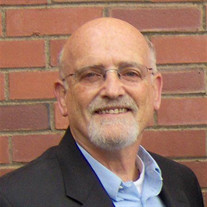 After a short and unexpected battle with pancreatic cancer, Dean Stephens passed away at the peaceful Evergreen Hospice in Albany, surrounded by his loving family. Directly after high school, Dean enlisted in the U.S. Navy from 1964 to 1968, studying electronics and then serving as a missile technician. He spent two six-month tours of duty in Vietnam, stationed on the U.S.S. Halsey DLG-23. Dean joked that after the Navy he spent his life in reverse order, enjoying an early retirement while he lived in Mendocino County, California, where he was part of the back-to-the-land movement of the 1970s, helping folks work on their land, cutting and selling firewood, and living in his VW van fitted with a bed and cook stove. During that time, he met and fell in love with his future wife Pam. Pam was 21, and Dean 23. They created a wonderful family life and were together 49 years until Dean’s passing much too soon at just 72. Dean was a unique individual—instantly likable with a positive aura about him. He had an infectious laugh and the twinkle of life in his eyes and was warm and upbeat. He had a unique friendliness and had a terrific sense of humor. Dean was a very kind and good husband, father, and son. Many held Dean in high regard as a man of calm demeanor, great integrity and honesty, deep caring and compassion, and a gentleman. Dean was very devoted to the Corvallis community and was always ready to help someone. Over the years, he volunteered in several groups including as an EMT in Alsea, an AYSO soccer coach and referee for six years, AYSO local treasurer from 1995 to 2007, and board member and president of his professional organization, Oregon Municipal Finance Officers Association. More recently, Dean was a volunteer advisor for Senior Health Insurance Benefits Assistance (SHIBA). He was a dedicated member of and a greeter at the Unitarian Universalist congregation in Corvallis. He was a wrestler in high school and was an avid Beaver wrestling fan. Dean’s long ago interests included playing old time tunes on his fiddle with Pam accompanying him on her guitar, and more recently he was a member of the Mid-Willamette Woodworkers Guild, at which shows he displayed his handmade mandolin and his beautiful rolling cutting board. Dean was a skilled cook and enjoyed nothing more than preparing an elaborate traditional Thanksgiving dinner for his family and friends. He was a jack-of-all-trades, including a plumber, electrician, carpenter, and a fine woodworker who owned his own cabinet shop outside Alsea from 1974 to 1984. After he developed an interest in computers in the late 1980s, Dean attended Oregon State University and earned a degree in business at age 41. He then earned his CPA and worked as an auditor for the Oregon Secretary of State, in the Finance Offices of both Benton and Lane County, and then as Fiscal and Project Manager for Benton County Public Works from 2001 until his retirement in 2014. Dean was very athletic, and until he became too ill this spring, he twice weekly rode his bike four miles each way to a strenuous workout at Fit over Fifty. At age 58, Dean hiked the South Sister although he came home barely able to walk. At age 41, Dean and North competed together in a Corvallis biathlon with North biking and Dean running, and they placed first in their combined age group. Dean was ambidextrous and won the Tri-Avery table tennis championship in 2007, playing with both hands. Dean had the ability to visualize every step of an upcoming wood project in his mind, without aid of a pencil. He had a mathematical mind and always looked forward to Sunday’s hardest Sudoku. Dean had a deep love of his pets, including several dogs and cats over the years, as well as his pet rat which he once brought to his elementary school in his pocket. Dean spent the last two and a half years of his life as a vegan because of his concern for the well-being of animals and the planet. He is survived by his adoring wife and life partner of 49 years, Pam Stephens; their sons, North (daughter-in-law, Heather), Clay, and Caleb; Dean’s brothers, Wayne and Jan; and Dean’s large extended family. Dean is also survived by his close friends from his men’s group and his deeply caring colleagues. Dean was preceded in passing by his father, Webb; his mother, Irene; and his infant daughter, Leah. Anyone wanting to leave a small remembrance in Dean’s name is welcome to do so c/o Evergreen Hospice in Albany, for their community kitchen supplies. A celebration of life will be from 2 to 4 p.m. on Saturday, October 20 at the Unitarian Universal Fellowship.

After a short and unexpected battle with pancreatic cancer, Dean Stephens passed away at the peaceful Evergreen Hospice in Albany, surrounded by his loving family. Directly after high school, Dean enlisted in the U.S. Navy from 1964 to 1968,... View Obituary & Service Information

The family of Dean Harry Stephens created this Life Tributes page to make it easy to share your memories.

After a short and unexpected battle with pancreatic cancer, Dean...