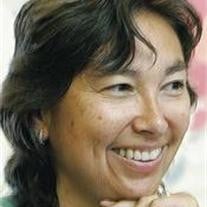 Oregon State University professor of anthropology Dr. Deanna Kingston, 47, of Corvallis followed her ancestors on Dec. 2. Deanna, a descendent of the King Island Native Community, was born, raised and resided in Oregon. She is survived by her supportive and loving family, son Edward Tattayuna Kingston; parents Olga Muktoyuk Kingston and Dalena SpiritSong Kingston; sister Rena Seunninga; brother-in-law Henk Seunninga; niece Kenna and nephew Connor Ryan Seunninga; brothers Kevin and A. Scott Kingston; and numerous family in Nome, Anchorage, Fairbanks and the greater Alaska region. Deanna often commented that she felt she was born an anthropologist. Her love for peoples, cultures, stories and legends carried her to many parts of the world, but always brought her home. Dr. Kingston received her Bachelor of Science degree in science communications from the University of Portland in 1986, a Master of Arts in Interdisciplinary Studies in cultural anthropology from OSU in 1993, and her doctorate in anthropology from the University of Alaska, Fairbanks, in 1999. In 2000, Dr. Kingston began her journey as a professor of anthropology at OSU. An unfailing supporter of students of color, she tirelessly worked with Native students, advising and co-advising many Native graduate students over her 10-plus years at OSU. Working as an advisor for the Native American Longhouse, she supported Native students and faculty alike at OSU, and served as one of the finest role models of a colleague, friend, mentor and scholar. Deanna had many great accomplishments through her work, her son and family, and her open candor during her long battle with cancer. She served on the National Science Foundation’s Office of Polar Programs Advisory Committee, and also on the Study for Environmental Arctic Change’s Responding to Change Panel. Dr. Kingston participated in numerous workshops and conferences, including “Designing an Arctic Observing Network” in Copenhagen, Denmark; an international conference on indigenous knowledge at Pennsylvania State University; and a workshop at the International Arctic Social Science Association meeting, sponsored in part by the Alaska Native Science Commission, on collaborating with Arctic communities. She was cognizant of efforts both in the circumpolar Arctic and in the Pacific Northwest to consult, respect and collaborate with Native American/indigenous communities, particularly when it came to their knowledge of the environment. Deanna’s inspirational thoughts and ideas will be kept alive in the numerous articles and publications she wrote, and in the legacy of the students she advised. Her unerring commitment to the betterment of others and her community were demonstrated in her participation in a myriad of organizations such as the International Arctic Social Science Association, the Alaska Anthropology Association, the Arctic Institute of North America, and the Planning Committee for the International Conference on Indigenous Placenames, Guovdageiadnu, Norway, September 2010. In 2003, she received a National Science Foundation grant to document and compare scientific knowledge with traditional ecological knowledge of King Island, Alaska. Thanks to her work through this grant, many King Island peoples were able to return to King Island and share their knowledge and wisdom with the younger King Islanders. This work culminated in one of her proudest accomplishments, the King Island Placenames Project interactive website, which documents the cultural geography, biogeography and traditional ecological knowledge of King Island (www.kingislandplacename.com). Devoted to furthering numerous causes and helping others along their paths, Deanna kept a long-running, open, intimate diary of her journey with cancer (deeupdates.blogspot.com) that was a source of inspiration and healing for her, her friends and families, and countless others living with or affected by the disease. Despite the often heavy topics of her blog posts, Deanna strove to find the humor and insight in every situation, and communicate both to others. Her courageous and kind spirit will forever be missed and remembered. About her next voyage, Deanna wrote on her blog, “Don’t be sad, be happy for my passing, ’cause I’m going on a wonderful journey. I’m not sure where, but if you miss me, just think about me and I’ll be there — wrapping you with my spirit, keeping you comfortable, wishing you well.” A public remembrance, honoring and celebration of Deanna’s life is being planned at OSU’s Native American Longhouse. A private family ceremony will take place at a later date. In lieu of flowers, please send donations to the Deanna Kingston Memorial at OSU Federal Credit Union, P.O. Box 306, Corvallis, OR 97339-0306.

Oregon State University professor of anthropology Dr. Deanna Kingston, 47, of Corvallis followed her ancestors on Dec. 2. Deanna, a descendent of the King Island Native Community, was born, raised and resided in Oregon. She is survived... View Obituary & Service Information

The family of Deanna Kingston created this Life Tributes page to make it easy to share your memories.