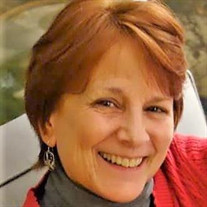 Debbie deTar April 30, 1952-June 25, 2018 Debbie was born as Debra Ann Gardella in San Francisco, California on April 30, 1952. She grew up in Santa Clara, California, the oldest of four siblings. Debbie graduated from St. Lawrence Girls Catholic High School in 1970 where she was Student Body President for two years. Debbie finished her college education at San Jose State University. She married John deTar in Los Gatos, California on September 8, 1973. They moved to Corvallis, Oregon in September 1976 to allow John to enroll in an Oregon State University graduate program. Debbie quickly became employed at Hewlett-Packard where she worked until 1991, parting from the company to follow a dream of operating a quilting and sewing store. Briar Rose Quilt Store opened a few months later. She provided Quilts from Caring Hands with its first regular meeting place in the store’s classroom. Debbie moved on to other pursuits when the store closed, finishing her working life as a phlebotomist in 2012. Debbie gave birth to two children, Matthew in 1980 and Laura in 1982. Debbie’s great passions in life were family, quilting, cooking, traveling and birdwatching. She made beautiful quilts for her children to take to college, for all of her nieces and nephews, for her two grandchildren and her grandnieces and grandnephews. Every family gathering included Debbie’s cooking, usually with two or more of her pies. She made sure her children learned the fine art of making pasta sauce from a young age, using recipes handed down by her father and grandfather. Debbie sent friends and family across the country her homemade jams, holiday breads, and cookies. She and John traveled in Belgium, Belize, Costa Rica, France, Germany, Guatemala, Italy, the Netherlands, Turkey, and to many US National Parks amongst other places. Building, supporting, and being with her strong, loving, and laughing family was what made her happiest. Debbie died Monday, June 25th, 2018 at her home in Corvallis surrounded by her adoring family. She died from pancreatic cancer. Debbie is survived by her husband of nearly 45 years, John; her children Matthew (Lucy) and Laura (Sara Jane); grandchildren Charlie and Winston; her siblings Amy, Dan (Jenny), and Ben (Jessica); and numerous nieces, nephews, extended family, and friends. A celebration of Debbie’s life will begin at 10:00 AM, August 17, 2018 at the Vue Corvallis, 517 SW 2nd Street, Corvallis. Donations in her memory may be made to Quilts from Caring Hands, the Oregon Nature Conservancy, or to the charitable organization of your choice. Debbie lived each day with immense joy, kindness, and openness that drew others to her. She will be in our hearts every day.

The family of Debbie deTar created this Life Tributes page to make it easy to share your memories.

Debbie was born as...