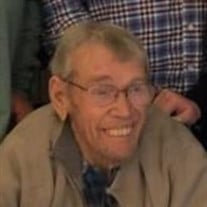 The fish in the Alsea river can finally exact their revenge when the ashes of Bert Cleary are spread on the water later this Spring. An avid outdoorsman, Beaver fan, and storyteller passed away peacefully in his sleep on Jan 27 at the age of 88. Delbert "Bert" Cleary was born in Salem Oregon on November 27, 1932 to George and Ruth (Waymeir) Cleary. The eldest of three children, he learned the value of hard work as a young paperboy and then dishwasher. Shortly after graduating from Salem Union High School, he enlisted in the Navy July 6, 1950. Honorably discharged in 1953, after serving in San Diego, Memphis, and Key West Florida, he enrolled at Oregon State University and became the first in his family to earn a college degree. While at OSU, he discovered a passion for OSU sports, wildlife biology, and a pretty Coed. Over a Christmas break, Bert and Suzanne (Frei) Cleary were married on December 26, 1955. They remained married until death did them part as the pretty coed passed in 2010 after 54 years of marriage. Together they raised five children, 13 grandchildren and three great grandchildren. They enriched the lives of countless more as their home was always open to friends, family, and neighborhood football games. Bert began his career as a wildlife biologist for Oregon Dept of Fish and Wildlife. He served the Department for over 30 years in a career that took him to Grants Pass, Enterprise, Pendleton, and finally Corvallis,Oregon. He worked on many projects to improve wildlife habitat. Most notably Fern Ridge Reservoir and Jewell Meadows. A tireless worker, Bert found time to volunteer and spend countless hours working on projects for the Boys and Girls Club. He was instrumental in the creation of the Williams field ballparks and spent many cold, wet, Decembers selling Christmas trees for the Club. Always stepping up to do the work and never seeking the credit- he was a huge asset to his community. As a high school senior, Bert forged his mother's name on a permission slip to play football. His athletic career lasted less than a day when he broke his ankle at the first practice. He didn't let that slow down his love of sports as he was an avid fan. He cheered as loudly and proudly for his children and grandchildren as he did for his beloved Beavers. A season ticket holder for Beaver football, basketball, and baseball, he supported his team through thick, thin, and even thinner. After the passing of his wife, he once again found love and companionship with his partner of 10 years, Merle Groff. Together they attended Suburban Church and enjoyed his final years at Bonaventure Assisted Living. He greatly appreciated all the wonderful care he received from the dialysis center and the Bonaventure staff. Bert is preceded in death by his parents and his wife Suzanne. He is survived by Merle Groff; his siblings Tom Cleary and Joan Lee. Five children, Dave (Marlo) Cleary, Doug (Evelle) Cleary, Dan (Kylee) Cleary, Bryce (Lisa) Cleary, and Heidi (Donald) Dixon. 13 grandchildren, and three great-grandchildren. He will be missed by many more. . Please share your thoughts and memories for the family at www.demossdurdan.com

The fish in the Alsea river can finally exact their revenge when the ashes of Bert Cleary are spread on the water later this Spring. An avid outdoorsman, Beaver fan, and storyteller passed away peacefully in his sleep on Jan 27 at the age of... View Obituary & Service Information

The family of Delbert Virgil Cleary created this Life Tributes page to make it easy to share your memories.

The fish in the Alsea river can finally exact their revenge when...