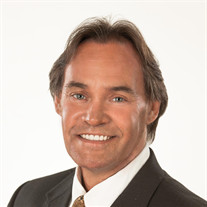 Donald Frederick Bartley, 60, of Corvallis, Oregon, died unexpectedly of a massive heart attack at 1:28 p.m. on Friday, August 16, 2019. Donald was born on May 13, 1959 in Kansas City, MO. As a young man his passion for adventure took him throughout the nation. Those adventures even included him managing a Chinese acrobat troupe that traveled from coast to coast. When it was time to settle down, Donald worked a variety of marketing and sales positions. The last 15 years were spent selling real estate as a broker for Keller Williams, Town and Country and Windermere Real Estate. Donald was a man who achieved both great personal successes and suffered devastating setbacks. He did everything with a smile, a joke, and an optimism that could not be taken from him. He lived his life seeking out joy in every moment and with passion and energy knowing everything would work out the way God intended. He loved his family and friends fiercely and they loved him back just as fiercely. Donald not only told great stories, he lived one. He is survived by his mother, Carole Bartley; daughter Kelsie Fell (Brandon Fell); grandchildren,Lincoln, Kingston, Ivy, Phoenix; four sisters, Ginger Wilkins (Dirk Wilkins), Peggy Shireman (Bob Shireman), Jennifer Miranda, Beverly Nagamoto (Toshi Nagamoto); nieces, Kendra Fahlsing, Natalie Attig, Brooke Miranda, Erika Nagamoto; nephews, Chris Wilkins, Kevin Shireman, Todd Wilkins, Blake Miranda; loving partner, Shelley Mulvey, and numerous aunts, uncles, great-nieces and nephews, and cousins. He is preceded in death by his father, Ray Bartley; paternal grandparents, Glenn and Grace Bartley and maternal grandparents, Donald and Irma Cordon. A funeral service will be held on Thursday, August 22nd at 2 p.m. at the First Baptist Church at 10th and Monroe. A Celebration of Life will be held for family members, close friends/coworkers on Friday, September 6th with details to follow. Memorial contributions in honor of Donald may be sent to a charity of your choice. Donald would also want you to have a laugh, be a friend and pay it forward. Please share your thoughts and memories for the family at www.demossdurdan.com.

Donald Frederick Bartley, 60, of Corvallis, Oregon, died unexpectedly of a massive heart attack at 1:28 p.m. on Friday, August 16, 2019. Donald was born on May 13, 1959 in Kansas City, MO. As a young man his passion for adventure took him throughout... View Obituary & Service Information

The family of Donald Frederick Bartley created this Life Tributes page to make it easy to share your memories.