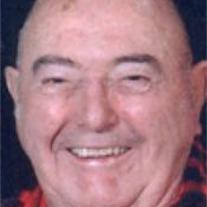 1924 — 2012 Longtime Corvallis resident Donald Harold Helfer passed away on May 24, 2012, at his home. He was 87. He was born in 1924 in Wichita Falls, Texas. He lived most of his early life in Ellensburg, Wash., with his grandmother, Sarah Helfer, and step-grandfather, Adolf Helfer. Don spent much of his time outdoors, and one day came home with two records that he had found, and that started his fascination with classical music. A neighbor gave him a violin, and he began taking lessons and studying music. He went on to be an accomplished violinist, but was also known around his school for his great sense of humor. During that time he met Dr. Jesse Rose, a local veterinarian who took him under his wing, taking him fishing and camping, and also allowing him to ride along on veterinary calls. Jesse and his family became important influences in Don’s life. At 16, Don graduated from Ellensburg High School, and continued his education at Washington State College. After a year of watching his classmates go to war (World War II), Don enlisted in the U.S. Navy, where he trained to be a medical corpsman and was stationed at the naval hospital in Samson, N.Y. After serving in the Navy, Don returned to Washington State University, graduating from the School of Veterinary Medicine in 1949. A week later, on June 5, 1949, he married his college sweetheart, Virginia (Ginger) McLean of Wenatchee, Wash. The following 14 years were spent in Tillamook County, where their four children were born. Don enjoyed his veterinary practice, but in 1953 he felt he needed a change, and accepted a position in the Veterinary Diagnostic Laboratory of the Department of Veterinary Medicine at Oregon State College. He focused on small animals, finally turning to poultry. He was highly respected by the poultry industry, and also worked closely with the Department of Poultry Science. He became an expert in diagnosing poultry diseases. He also advanced through the ranks to Professor of Veterinary Medicine. In 1981, he was asked by the head of the poultry department to assist in the write-up of a poultry training and Extension project for the North Yemen Arab Republic. Having accepted that opportunity, he was soon off with others to the NYAR for several weeks of intense work preparing the proposal, which was approved by the United States Agency for International Development. During this initial period it became very obvious that he had developed an intense interest in the activity, and he joined the Department of Poultry Science as Professor of Poultry Science to serve as the director of an academic staff assigned to Yemen. This was a major undertaking, and involved many short visits to Yemen. When the project was over, it was judged a success. Upon retirement in 1986, Don was named Emeritus Professor of Veterinary Medicine and Poultry Science by Oregon State University and the State System of Higher Education. He and Ginger moved to the outskirts of Philomath in 1976. Don continued his hobby of restoring 1931 Model A Ford roadsters, one of which he rebuilt from three different cars. He and Ginger drove many miles touring the Northwest in their roadster. Don was an active member of the Corvallis Historic Auto Club. A hobby that he also enjoyed was building from scratch and flying radio-controlled model airplanes with his friends in the Benton County Model Airplane Club. His favorite pastimes were playing poker (having played it for the better part of 65 years) and fishing with his longtime fishing buddy, Bob Govro. The Helfers moved back to Corvallis in 1993, moving to a wonderful neighborhood where neighbors became good friends. Don is survived by his wife, Ginger; daughters, Carol Helfer of Portland and Patty Waggener of Atlanta, Ga.; a son, Bob Helfer and wife, Susie, of Bend; and two grandsons, Steven Waggener of Missoula, Mont., and Jon Waggener of Atlanta. He was preceded in death by a daughter, Gail Lynn, in 1952. A memorial will be held late this summer. Memorials can be made to Chintimini Wildlife Rehabilitation Center or Benton Hospice Service.

The family of Donald Helfer created this Life Tributes page to make it easy to share your memories.