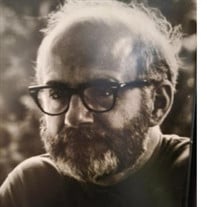 Donald Akers Jones 12/27/1930 – 6/25/2021 Aged 90, beloved and treasured husband, father, grandfather, and friend passed away in his home in Corvallis, OR on June 25, 2021. He was predeceased by his parents Gomer David and Dorothy Alice (Akers) Jones and his sister Ruth Ilene (Jones) Ecord. He is survived by his wife of 27 years Sheryl Bernard, His four children: Melonie Buckingham, Murray (Genia Hollander) Jones, Gordon (Lynne nee Ziskind) Jones and Jennifer (Jay) Jolliffe and grandchildren Kimberley, Kristina and Colleen Buckingham and Meghan, Claire and Grace Jolliffe, beloved nieces and nephews from his sister Ilene's family of three children, five grandchildren and eight great-grandchildren. Don's early life followed his father's job on the Santa Fe Rail, born in Topeka, Kansas, a brief stop in Chanute, Kansas and attending high school in Fort Madison, Iowa, where he graduated from Fort Madison high school in 1948. Don and sister Ilene shared a deep love of trains and the Santa Fe, starting at this time continuing through to train vacations together in their later years. Don enrolled in Iowa State University in engineering but transferred into Math (Probability and Statistics) which he said a favorite high school math teacher had told him was his natural path. He graduated in 1952 from ISU as a distinguished military student, was tendered a commission as a Second Lieutenant in the regular army and was shipped out in 1952 to Korea as the truce was signed. As a Forward Observer with the 34th Infantry (National Guard) Division, he began using his natural abilities in math to guide others. After being honorably discharged in Sept of 1954 Don returned from Korea and filled the year working at Northwestern Mutual Life before enrolling in graduate school at the University of Iowa. On November 21, 1956 he married Shireen Murray in Burlington, Iowa. Don earned his PhD in Probability and Statistics in 1959. He credited his advisor Professor Hogg for opening many doors, including his position as a Professor of Math (Probability, Statistics and Actuarial Science) at the University of Michigan in 1959. In 1966 he took his family with his first wife Shireen and four young children to Jerusalem, Israel to instruct the Hebrew University in starting up their Actuarial Program. Like many professors, Don had side gigs as an actuarial expert while in Ann Arbor. These included UM based Actuarial firm of Fisher, Nesbitt, Mareson and Jones and Ann Arbor Actuaries, Inc., which he started in the 1970's and was joined by his former student, lifelong friend Dale Griffin. Don was always active in the Society of Actuaries preparing exams and guiding the next generation of actuaries. In the 1980's he collaborated with Newt Bowers, Hans Gerber, Cecil Nesbitt and James Hickman to create the definitive text book for Actuarial Math. He continued with this work until his retirement from UM in 1989. In 1990 Don moved to Corvallis, Oregon and joined the Oregon State University faculty as an Actuarial Math Professor where he worked until his retirement in 1998. In Corvallis he met Sheryl at a community dance and were married September 4, 1993. Together they shared progressive political passion, enjoyed seasons at the Oregon Shakespeare Festival, travel, concerts in the park and visits with Sheryl's children Beth Schwartz (Owen O'Malley), and David Schwartz and grandchildren Laurel, Hazen, Miles and Colin O'Malley. A consummate educator, Don found joy throughout his life by using his strengths to give back to the community. In Ann Arbor he biked hundreds of miles in the recycling center bike-a-thons. In retirement he led the Corvallis senior center tax preparation services. But mostly Don loved to establish relationships; through annual ski trips with former colleagues, playing snooker with friends, decades with two simultaneous bridge clubs with Ann Arbor friends, or his weekly Corvallis Coffee Group, "Beanery Bunch". No services are planned at this time. In lieu of flowers the family requests donations to Gomer D. Jones Diesel Technology Fund (Don's Father), Washburn University Foundation, 1729 MacVicar Ave, Topeka, KS 66604. The family sends deep and sincere appreciation to the aides and nurses from New Horizons and Evergreen Hospice for their kind and caring service to Don throughout this journey. Published by Topeka Capital-Journal from Jul. 17 to Jul. 18, 2021. Demoss-Durdan is handling arrangements.

The family of Donald Akers Jones created this Life Tributes page to make it easy to share your memories.