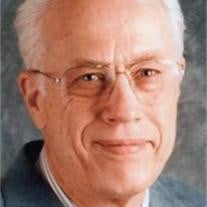 Donald Eugene Mattson passed away at his home from brain cancer on Tuesday, Aug. 25, 2009, into the arms of his loving savior Jesus Christ. He was born to DeWitt and Helen Mattson on May 19, 1934, in Chatsworth, Calif. The family moved to Buttonwillow, Calif., where Donald entered kindergarten. His family owned a cotton farm where he learned a good work ethic and to fix just about anything. He graduated from Bakersfield High School in Bakersfield, Calif., in 1953, and from Bakersfield College in 1955. He earned a master's degree from the University of California, Davis in 1957, and a doctorate in veterinary medicine from the School of Veterinary Medicine, University of California, Davis in 1959. While at Davis, he was active in Intervarsity Christian Fellowship. Donald married Jackie Price in Bakersfield on Dec. 22, 1959, and was then commissioned into the Veterinary Corps of the U.S. Army as a First Lieutenant. He served two years in the Department of Veterinary Virology at Walter Reed Army Institute of Research in Washington, D.C. After the service, he returned to school and earned a doctorate in veterinary science (virology) from Washington State University in Pullman, Wash. He was a professor at Oregon State University for 39 years, teaching immunology and some graduate classes, and was the director of the virology section of the Oregon State Diagnostic Laboratory. Donald was also an adviser for veterinary students for many years, and served on the selection committee for the School of Veterinary Medicine. He was an adviser for Christian Veterinary Missions at OSU. Donald retired June 1, 2003. He had many interests, and cooking for his family was one of his favorites. Other interests included raising marionberries and boysenberries, woodworking and fishing. He loved helping his children and grandchildren with building/repair projects. Most of his retirement was lovingly spent studying prophecy in the Bible. One of the highlights of his retirement was a trip to Israel, a lifelong dream. Donald was preceded in death by his parents and his brother, Roy Mattson. Survivors include his wife of 50 years, Jackie Mattson; two sons, Steven D. Mattson and his wife, Corina, and children, Karisa, Steven, Leah and Alex, and Daniel E. Mattson and his wife, Anne Marie, and daughters, Sydney, Taylor and Riley; and a daughter, Tricia Mattson Lord, her husband, Steven, and children, Andrew and Hannah. He is also survived by three sisters, Phyllis McClure and Doris Barnes and her husband, Kendall, of Bakersfield, and Christine Bruhn and her husband, John, of Davis, Calif.; two sisters-in-law, Patricia Miller, and her husband, Odie, of Bakersfield, and Marilyn Mattson of West Palm Beach, Fla.; and many nieces, nephews and cousins. A memorial service will take place at 10 a.m. Friday, Sept. 4, at Calvary Chapel of Corvallis, 2125 N.W. Lester Ave. In lieu of flowers, memorial contributions can be made to Calvary Chapel or Benton Hospice Service.

Donald Eugene Mattson passed away at his home from brain cancer on Tuesday, Aug. 25, 2009, into the arms of his loving savior Jesus Christ. He was born to DeWitt and Helen Mattson on May 19, 1934, in Chatsworth, Calif. The family moved... View Obituary & Service Information

The family of Donald Mattson created this Life Tributes page to make it easy to share your memories.

Donald Eugene Mattson passed away at his home from brain cancer...