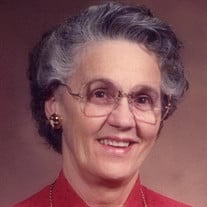 Doris Mabel Magedanz Aug. 6, 1919 — Nov. 29, 2016 Doris Mabel Magedanz, 97, died peacefully on Nov. 29, 2016, and is now spending eternity in heaven with her Savior and Lord. Doris was born in Burke County Township, North Dakota, the daughter of William and Mabel Sloan. She was the last surviving sibling of five brothers and one sister. She and her siblings were able to fix anything that broke because during the depression if you didn’t fix it, you did without. Because of the early death of her father, Doris had to drop out of school at an early age to go to work to help support the family. Doris met her future husband, Norman, while working as a waitress in Bowbells, North Dakota. Because of a medical situation, Norman was unable to fight in World War II so they spent the war years in Portland so he could work on “Ships for Victory” at Buckler-Chapman Ship Joiners. After the war, they moved back to Bowbells where they started their family and Norman began working in the construction business. They moved to Lincoln City in 1957 where they became partners in the house construction business. Norman built or remodeled the houses and Doris painted them inside and out, was responsible for all of the indoor decorating and appliance choices, created the landscape, and cleaned the houses ready for sale. After working together all day, they would go home where Norman would relax in a chair and Doris would cook dinner, clean house, and take care of three children. In 1964 the family moved to Corvallis and they continued the construction business and built several houses. Norman died in 1975 and Doris worked as a housekeeper for sororities for several years before retiring. After retirement, Doris enjoyed gardening and loved nothing more than mowing the yard and ensuring it was done “just so.” Her other enjoyment was faithfully reading her Bible day after day, year after year. Doris is survived by her three children, Janet Magedanz, Norma Eaton and husband Win, and Bill Magedanz and wife Sue; plus three granddaughters and one grandson. Doris was a long-time member of Calvin Presbyterian Church where she faithfully attended Bible Study every Tuesday afternoon. Doris died in her own bed in the last house she and her husband built. In lieu of gifts, contributions in Doris’s memory can be made to either Benton Hospice Service www.bentonhospice.org or Calvin Presbyterian Church. A memorial service will be at 2 p.m. Dec. 10 at Calvin Presbyterian Church, 1736 NW Dixon St, Corvallis, OR 97330

The family of Doris Magedanz created this Life Tributes page to make it easy to share your memories.