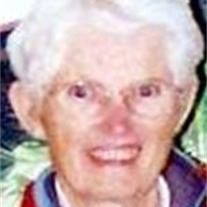 Doris Terriere, 86, died peacefully on April 13, 2010, in Corvallis after a short illness. She was born Doris Irene Tilley on Aug. 29, 1923, in Twin Falls, Idaho. She was the second child of Orley and Maude Tilley. She was educated in schools in Kimberly, Idaho, through high school. She attended the University of Idaho in Moscow, Idaho, in 1941, where she met and married Leon Terriere in 1944. During the war, she worked in Twin Falls and later in Monterey, Calif. After Leon’s discharge from the U.S. Army, the couple moved to Corvallis, where Leon attended graduate school at Oregon State University and they began a family. Doris and Leon were very proud of the home they built in northwest Corvallis during evenings and weekends, with toddlers in tow. Theirs was one of the earliest homes built in the part of Corvallis near Cloverland Park. Doris lived in the home for nearly 60 years. When Leon lost most of his vision in 1957, Doris returned to her studies at OSU and earned a bachelor of science degree in general science, graduating in June 1961. Her science background made it possible for her to assist Leon in his research and teaching by reading scientific papers to him, which she did until his retirement in 1981. The family of five, with Doris as guide and driver, was active in boating and camping for many years. Her other hobbies included gardening, reading, travel, walking, wine making and investing. When Leon was still alive, they enjoyed dancing at the Elks Lodge. She was a member of the Unitarian Universalist Fellowship of Corvallis. She was active in the OSU Folk Club Thrift Shop program and the Retired and Senior Volunteer Program. Doris was sweet and kind, and was a good listener. She had a warm smile, and was well-liked by all. She will be dearly missed by her family. Doris was preceded in death by her husband, Leon C. Terriere. She is survived by her son, Roger, of Seattle, Wash., and daughters Nicole Mays of Roseville, Calif., and Susan Henry of Joshua Tree, Calif. She has three grandchildren, Kyle Terriere, Karin Mays and Nevin Mays. She also is survived by her brother, Norman Tilley, of Twin Falls, and a sister, Francis Frye, of Montrose, Colo. A private memorial will take place at a later date. Donations in memory of Doris can be made to the Terriere Disability Scholarship Endowment Fund administered by the OSU Foundation, 850 S.W. 35th St., Corvallis 97333.

Doris Terriere, 86, died peacefully on April 13, 2010, in Corvallis after a short illness. She was born Doris Irene Tilley on Aug. 29, 1923, in Twin Falls, Idaho. She was the second child of Orley and Maude Tilley. She was educated in schools... View Obituary & Service Information

The family of Doris Terriere created this Life Tributes page to make it easy to share your memories.