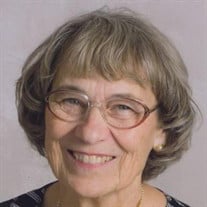 Dorothy Mae Jackson, 90, passed away on Thursday, September 20, 2018, surrounded by family. Dottie, as she was known, was born on August 10, 1928, to Homer and Ernestine Beach in Corvallis, the youngest of six children. She had a happy childhood and was raised in a loving family on their farm. Dottie attended Corvallis High School, and after graduating met Joe Massey, who had moved to Corvallis from Illinois, when both worked at J.C. Penney’s in downtown Corvallis. A few months later, Joe proposed to Dottie on top of Marys Peak, and the two were married on August 31, 1947. Joe was a country musician, and the new couple spent many years enjoying his performances throughout Oregon and on local radio stations. They raised four daughters, living in both Corvallis and Albany. As her daughters grew up, Dottie was a 4-H leader, and a Bluebirds leader, and lifelong sports fan, especially the OSU Beavers, Corvallis Knights and Seattle Mariners. She worked for some years at Citizens Bank, and for over 20 years at Northwest Natural Gas. Dottie was known for her smiles and positive attitude, accepting with grace whatever life brought, always looking at the bright side and making the best of any situation. Dottie was widowed when Joe passed away in 1976. Although heartbroken, she continued to love, and was widowed twice more after losing Bob Jackson, with whom she spent two years until his death, and Lonnie Christensen, with whom she spent 18 years until his death. At the age of 85, she reconnected with a schoolmate, Bob Rondeau, and they had five wonderful years together. Throughout her life, Dottie devoted herself to her family, sewing, cooking, nurturing, and raising flowers and vegetables. She enjoyed holidays, baking, decorating and family traditions. She was also a writer, publishing many articles in magazines, and with her daughter Pam, as illustrator and songwriter, wrote a children's Christmas story, “Sydney Kangaroo's Christmas,” which was distributed to hundreds of children in the Willamette Valley and online. She also enjoyed making crafts, and sewed doll blankets and baby dolls which she gave to hospitals, police departments and social service groups for children in need. Dottie spent many happy days on the Oregon coast, and enjoyed several trips abroad, including Ireland, Europe, Panama, Bermuda and Hawaii. She was preceded in death by her previously mentioned spouses; her parents, Homer and Ernestine; and her five siblings and their spouses, Frances and Glen White, Jimmy Applegate, Jean and Kelly Coffin, Margaret and Paul Stagner, Bob and Polly Beach, and Eloise and Frank Gessford; and two sons-in-law, Ed Butler and Mark Pinard. She is survived by her companion, Bob Rondeau; daughter Peggy Butler, daughter, Joy (Patty) Massey, daughter, Penny and son-in-law Barry Greig, and daughter, Pam Massey and son-in-law Mike Duncan. She is also survived by her beloved grandchildren and their spouses, Renee (Ken) Foster, Valerie (Raj) Chaube, Ryan (Kim) Greig, Daren (Regina) Greig, Shane (Krista) Greig, Jake (Devin) Duncan, and Katy Duncan; and eight beloved great-grandchildren, Mckenzie, Courtney, Deven, Shaan, Matthew, Hudson, Ryland, and Olivia; as well as many nieces, nephews, and lifelong friends. She lived a full life, leaving those who shared that life with many happy and inspiring memories. She will be dearly remembered and missed. A memorial service will be held from noon to 2 p.m. on Saturday, October 27, at Good Samaritan Church, in Corvallis.

Dorothy Mae Jackson, 90, passed away on Thursday, September 20, 2018, surrounded by family. Dottie, as she was known, was born on August 10, 1928, to Homer and Ernestine Beach in Corvallis, the youngest of six children. She had a happy childhood... View Obituary & Service Information

The family of Dorothy "Dottie" Jackson created this Life Tributes page to make it easy to share your memories.