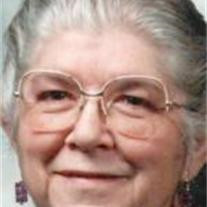 The journey here on earth of the beautiful, tender soul of Dorothy began on March 3, 1925, in Maxville. The family moved around a little before settling in Corvallis when Dorothy was 8 years old. After graduating from Corvallis High School in 1943, she worked at the cannery for a few months, and then got a job as the secretary to the dean of anthropology at Oregon State University. While skating with friends, Dorothy met Rudy, who fell in love with her at first sight. Rudy was a Marine stationed south of town at what is now the Corvallis Airport. From that day on, Rudy, knowing this was the woman to be his wife, pursued Dorothy until she agreed to marry him on April 21, 1945, in Brawley, Calif. Unfortunately for the bride and groom, Rudy was deployed overseas 13 days later. Dorothy returned to Corvallis, and was able to get back her job at OSU. When Rudy got out of the military, he also returned to Corvallis. They eventually moved from Oregon to Idaho, settling in Washington in 1962. Dorothy continued to work until the birth of her first child in 1948. Dorothy loved family and being a mother; she was active in Scouts, the parent-teacher association, music and sports for her children. Dorothy was very proud of all her children. She was a patient, kind, loving and understanding mother. Nothing made her happier than when she was with her family. As her children grew up, her firstborn starting college, her son in middle school and her youngest starting school, Dorothy, who loved being with people, became an Avon lady. As in anything else she did, she excelled and was honored as a member of the President’s Club, earning many awards and recognitions. Dorothy was also in charge of and ran some of the election booths for many years. Dorothy had many an interest: reading, needlepoint, crocheting, gardening, and collecting bells, thimbles and spoons. She adored animals, and liked to socialize and help others. Dorothy looked for the good in people, and was always concerned for others. She was happy, never complained or got angry; she could find the silver lining in any situation. Dorothy had a great sense of humor, was fun to be with, found joy in the little things, and had a smile that would always brighten your day. Dorothy started her new life on Saturday, Sept. 25, 2010. She will be greatly missed by all who knew her. Our loss is heaven’s gain, and our angel is now where she belongs. She was preceded in death by her parents, George and Winifred Neabeack of Corvallis; sisters-in-law E.C. Neabeack of California, Muriel Neabeack and her son, Nevin, of California, and Delora Koecke of Puyallup, Wash.; and brothers-in-law Garth Koecke of Puyallup, Bud Fischer of Wisconsin, and Wayne Koecke and his son, David, of Tacoma, Wash. She is survived by her husband, Rudolph Koecke of Tacoma and Albany; daughter, Sharon Fleischmann of Corvallis; son, Dean Koecke and his wife, Donna, of Tacoma; daughter, Patti Hightower and her husband, Paul, of Albany; six grandkids; nine great-grandchildren; brother, Marvin Neabeack of California; sisters-in-law Audrey Fischer of Wisconsin and Yvonne Koecke of Washington; and many nieces and nephews. A viewing will take place at noon Saturday, Oct. 2, at Twin Oaks Cemetery in Corvallis. A service will follow at 12:30 p.m.

The journey here on earth of the beautiful, tender soul of Dorothy began on March 3, 1925, in Maxville. The family moved around a little before settling in Corvallis when Dorothy was 8 years old. After graduating from Corvallis High School... View Obituary & Service Information

The family of Dorothy Koecke created this Life Tributes page to make it easy to share your memories.

The journey here on earth of the beautiful, tender soul of Dorothy...