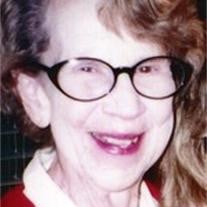 Dulcie Joan Nicholas of Corvallis died Oct. 6 at Conifer House, where she was affectionately cared for. She was 89 years old. She was born in Brisbane, Queensland, Australia, to John Robert and Dorothy Lawrence Woodburn. Dulcie was a sweet, strong lady with a beautiful spirit and a wonderful sense of humor. After graduating in 1937 from Somerville House Girls' School in Brisbane, she attended business school and worked for a local newspaper in Casino, New South Wales, Australia. She served in the Royal Australian Women's Air Force during World War II as a secretary at the rank of corporal. She met Major Jack Voorhies Nicholas in Australia during the war, when he was on leave and serving in the U.S. Army Signal Corps in New Guinea. Dulcie flew from Australia to the United States in response to a letter from Jack proposing marriage. The two married in Reno, Nev., on Oct. 8, 1946. Dulcie became an American citizen on May 16, 1949, shortly after the birth of her son. She never lost her lovely Australian accent. She was a homemaker who cared for her family all over the world, including Istanbul, Turkey; Heidelberg, Germany; Kwajalein Atoll; Augusta, Ga.; San Francisco, Calif.; Sausalito, Calif.; and Madison, Wis.. She was a gifted writer who filled numerous journals and penned colorful stories about her home country, her travels, her family and her cats. Upon her husband's retirement from the Army in 1961, Dulcie and her family moved to Portland, her husband's hometown. Her husband preceded her in death in 1975. She lived in Portland until 1989, when she moved to Corvallis to live closer to her son. She called her third-floor apartment on Walnut Boulevard her "tree house," and lived there for 12 years before moving to Conifer House in 2001. She watched squirrels and birds in the trees outside her apartment; read mystery novels before bedtime; and avidly followed the goings-on of British royalty and movie stars in People magazine. She adored her grandsons, loved cats and flowers, and kept peppermint patties in her candy jar. Before her health prevented outings, Dulcie regularly attended a Corvallis Senior Center yoga class; took daily walks along Walnut Boulevard; and shopped at WinCo. She enjoyed salmon barbecues at her family's home, and going out to local coffeehouses. After years of proper tea drinking, Dulcie switched to hot chocolate. She was known at Burton's Restaurant as the "Muffin Lady" because she always ordered a muffin with her hot chocolate. She enjoyed dinners out and family vacations at the Oregon coast and at Camp Sherman on the Metolius River. She is survived by her son, Jay Nicholas and his wife, Lisa, of Corvallis; stepson Jon Nicholas and his wife, Lorie, of Connecticut; brother John Woodburn of Brisbane; grandson David Nicholas and his wife, Heather, of Portland; grandson Jackson Nicholas of Corvallis; many nieces and nephews in Australia; and cherished friends and caretakers. Remembrances can be made in Dulcie's name to Benton Hospice Service. Jay and Lisa will host a gathering at 11 a.m. Saturday, Oct. 24, at their home to celebrate Dulcie's life, and to share a brunch of muffins and hot chocolate.

Dulcie Joan Nicholas of Corvallis died Oct. 6 at Conifer House, where she was affectionately cared for. She was 89 years old. She was born in Brisbane, Queensland, Australia, to John Robert and Dorothy Lawrence Woodburn. Dulcie was... View Obituary & Service Information

The family of Dulcie Nicholas created this Life Tributes page to make it easy to share your memories.