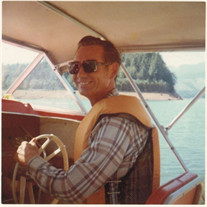 Earl K Powell, Sr. Jan 19, 1927 – Jul 21, 2014 Earl K. Powell, Sr. of Corvallis died Monday at his home. He was 87. Born in Mapleton, Iowa to Albert and Grace Powell, Earl was one of eight siblings who endured the hardships of the Great Depression in the Midwest. Seeking a better life, at the age of 16, Earl headed west. He joined the Navy, serving in WWII and the California shipyards. Thereafter, Earl worked mostly as a self-employed contractor. Always with an eye for a bargain, he enjoyed collecting items and tinkering on various projects. He loved to garden and eventually became a “snowbird” between Oregon and Arizona. He married June L. (Whiteman) Powell on August 18, 1955. He was preceded in death by his wife of 46 years, along with his parents and seven siblings. Earl remarried in 2013 to Wilma Woodraska. He is survived by his wife Wilma (Albany), three sons, Earl Jr. (Tangent), David (Corvallis) and Richard (Monmouth); three daughters-in-law, five grandchildren, and three great-grandchildren. Visitation will be from 9:00 – 12:00 p.m. Friday, July 25, at DeMoss-Durdan Funeral Home, 815 NW Buchanan Ave., Corvallis, with a 2:00 pm graveside service at Oaklawn Memorial Cemetery, 2245 SW Whiteside Drive. Please share your thoughts and memories for the family at www.demossdurdan.com

The family of Earl Kenneth Powell created this Life Tributes page to make it easy to share your memories.