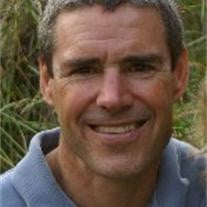 Edward Paul Bomber of Corvallis died Thursday, Oct. 2. He was 48. Ed lived a life of high energy, passion and commitment. He distinguished himself early in life by graduating from Central Catholic High School in Portland. His academic and athletic achievements landed him a scholarship to Notre Dame University where he competed on the cross country and track teams. A true Oregonian and lifelong Beaver, he completed his engineering studies and continued running at Oregon State University. After a brief career in the mining industry, Ed began a long tenure in engineering and marketing with Hewlett Packard in the San Francisco Bay Area, Germany, Vancouver, Wash., and Corvallis. He maintained a high level of fitness, competing at a national level in running races from the mile to the marathon. He met Kay Zupan and together they have raised a family of four active and happy children: Paul, Gavin, Joanna and Allyson. As a family they have been involved in the Catholic Church, from teaching children’s education to serving coffee and donuts and singing at retirement homes. They have also been involved in supporting the education in their children’s schools: Philomath Montessori, Adams Elementary, Ashbrook Independent School and Linus Pauling Middle School. Ed’s passion for sport and community spirit resulted in the recent opening of Northwest Multisports, a triathlon store he envisioned as a resource for anyone involved in improving their fitness. In recent years, he was a top age group finisher in many triathlons including the Idaho and Canada lronman races. Family trips often focused on participation in triathlons, hikes and long bike rides with Kay and Ed as each other’s biggest fans. He was a competitor, a mentor, and an inspiration to the many athletes he befriended. Ed and Kay remained close with their many family members with events in the Portland area and annual family gathering throughout the western United States. Ed was preceded in death by his father, Francis. He is survived by his loving wife, Kay; children Paul, Gavin, Joanna and Allyson; mother Marian; and siblings Robert, Andrew, Stephen, Ann, Cathy and Dorothy. A funeral Mass will be held at 2 p.m. Wednesday, Oct. 8, at St. Mary’s Catholic Church in Corvallis. Father John Henderson will officiate. In lieu of flowers, memorial contributions can be made to Girls on the Run, c/o KidSpirit, 125 Langton Hall, Oregon State University, Corvallis, OR 97331.

Edward Paul Bomber of Corvallis died Thursday, Oct. 2. He was 48. Ed lived a life of high energy, passion and commitment. He distinguished himself early in life by graduating from Central Catholic High School in Portland. His academic and... View Obituary & Service Information

The family of Ed Bomber created this Life Tributes page to make it easy to share your memories.

Edward Paul Bomber of Corvallis died Thursday, Oct. 2. He was...