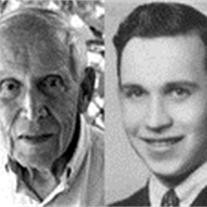 Feb. 8, 1921 — Dec. 23, 2009 Elbert “Bert” Roy Palmer, born Feb. 8, 1921, in Centralia, Wash., died Dec. 23 at his home in Corvallis, surrounded by family. He was the second-born child and eldest son of Roy Michael Palmer and May St. John. His father was a contractor and decided to move his family to southern Oregon in hopes of developing a gold-mining operation at Oscar Creek. With lack of water needed for strip-mining, his father started Palmer’s Community Cannery in Grants Pass, and the entire family participated in running the facility for the next 12 years. At age 19, Bert passed his union carpentry tests and began building igloo units for the Umatilla Ordnance Depot. After the Pearl Harbor attack in 1941, Bert left for Seattle, Wash., and began working at a rework shop at Boeing Aircraft, making templates for running drills, and later became a shop foreman on the B-29 bomber. While working at Boeing, he met his future wife, Dorothy Cole of Pablo, Mont. Their first date was spent ice-skating, bicycle riding and attending a Mills Brothers show. They were married less than four months later in Renton, Wash. In 1945, they moved to southern Oregon, where Bert worked for Oscar Jolson and later Snook Brothers, working on both road and bridge construction in various locations in Oregon. The family settled in Corvallis in 1951, when their daughter began first grade. Bert supervised commercial construction, working for Jim Turner and later Quentin Greenough. His projects included the Corvallis Gazette-Times, the Benton County jail and the Safeway store. For the past 25 years, Bert and his wife have worked as a team, maintaining and managing Palmer Properties. Bert and Dorothy attended the First Presbyterian Church until the 1970s, when they joined and became actively involved in the Church of Jesus Christ of Latter-day Saints. Bert was proud of the Concours d’Elegance award won for his 1928 screened-sided Chevrolet. He also had begun work on the restoration of a 1937 Packard convertible. He was preceded in death by his son, Jerald Elbert, who died in infancy. His survivors include his wife, Dorothy; children Jeannette Harper and husband Mark of Corvallis, Sally Lavin and husband Mark of Newport, and Jill Palmer and husband Bertram Lehrer of San Francisco; sister Hermie Medley; brothers Dean, Richard and Dale Palmer; seven grandchildren; and 18 great-grandchildren. A loving, kind and generous man, family patriarch and beloved “Grandpa Palmer” to many, he will be greatly missed. Funeral services will be at 2 p.m. Wednesday, Dec. 30, at the LDS Stake Center Chapel, 4141 N.W. Harrison Blvd., with burial following at Oaklawn Memorial Park, Corvallis. Donations may be made to Samaritan Evergreen Hospice.

The family of Elbert Roy Palmer created this Life Tributes page to make it easy to share your memories.