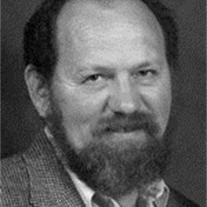 Sept. 11, 1939 — Dec. 31, 2008 Corvallis resident Eldren “Leon” Parsons died Dec. 31, 2008, at home with his family at his side. He was 69. He was born Sept. 11, 1939, in Toledo to Benjamin and Elsie Parsons. Leon graduated from Cloverdale (California) High School in 1958. He married Sandra Holmes in Cloverdale in 1959. The couple lived in San Jose, Calif., where they had three children. Leon joined the Carpenters Union in San Jose and worked as a carpenter there for many years. They moved to Oregon in 1976, and Leon started his own construction company building custom homes and was well-known for his meticulous, detailed workmanship. Leon loved woodworking, a skill he developed while in high school, where he built a boat and many other projects; he continued working with wood throughout his life. He loved the outdoors and was an avid hunter and fisherman. He loved boating and teaching his children to water-ski. There were countless camping, fishing and boating trips with family and friends. In 1989, Leon and Sandra traveled to Germany for a month-long vacation to spend time with their daughter Kathie and her husband, Bill, who were living abroad at the time. It was a trip that holds many special memories. Leon was involved in the Boy Scouts program and was a member of The Church of Jesus Christ of Latter-day Saints. Leon and Sandra would have celebrated their 50th wedding anniversary on April 25. He is survived by his wife, Sandra; brother Keith Parsons of Ukiah, Calif.; sister Sue Fite of Dayton, Nev.; sons Robert Parsons and his wife, Jackie, of Corvallis, and Jareme Parsons and his fiancée, Laura, of North Bend, Wash.; and son-in-law Bill Butler of Philomath. He is also survived by his grandchildren, Ashley, Alicia and Cody Parsons; and great-granddaughter Olivia of Corvallis. He was preceded in death by his father, Ben; mother, Elsie; and daughter, Kathie Butler of Philomath, who died on July 24, 2008. He was much loved and will be missed by all who knew him. A memorial service was held Saturday, Jan. 10, at The Church of Jesus Christ of Latter-day Saints on Harrison in Corvallis. In lieu of flowers, memorial contributions can be sent to the American Cancer Society in care of DeMoss-Durdan Funeral Home, 815 N.W. Buchanan Ave., Corvallis, OR 97330.

The family of Eldren Parsons created this Life Tributes page to make it easy to share your memories.