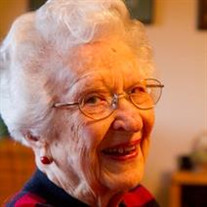 Our sweet mother, Eleanor Key Grear, passed away under the watchful glow of a full moon at Samaritan Evergreen Hospice on the evening of June 29, 2018. Eleanor began her life’s journey in Columbus, Georgia on December 8, 1918. She was the daughter of Bascom Biggers and Ella May Key. She adored her older brother Crawford “Buck” Key although she had some interesting tales to tell about their adventures. Eleanor wed Lieutenant George Grear, Jr. on November 7,1942 in Columbus. Eleanor’s path took her to California with her husband and three children for 27 years but she continued to be the ultimate southern lady, thick accent and all. Upon the passing of her husband, Eleanor returned to Columbus in 1983 where she remained until 2011. At that time, she felt the need to be closer to her daughter and moved to Oregon where she resided until her passing. Eleanor is preceded in death by her beloved husband, George and their son, George III. She is survived by her son, John, of Santa Barbara, CA and daughter, Meg and daughter-in-law Elisabeth DeGroot, of Corvallis, OR, grandson Jeff and his wife Annie of Seattle, WA and granddaughter, Emily and great grandchildren Carolina and Cayden of Colorado Springs, CO. A memorial service will be held in Columbus on Saturday, September 29 at Parkhill Cemetery. Donations in Eleanor’s memory may be made to Columbus, Georgia First Presbyterian Church or Samaritan Evergreen Hospice in Albany, OR. Please leave condolences and memories at demossdurdan.com.

Our sweet mother, Eleanor Key Grear, passed away under the watchful glow of a full moon at Samaritan Evergreen Hospice on the evening of June 29, 2018. Eleanor began her life&#8217;s journey in Columbus, Georgia on December 8, 1918. She... View Obituary & Service Information

The family of Eleanor Key Grear created this Life Tributes page to make it easy to share your memories.

Our sweet mother, Eleanor Key Grear, passed away under the watchful...