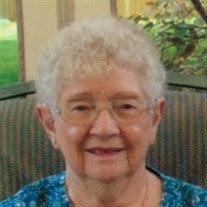 Elizabeth "Betty" Lorena (Mohr) Heibel passed away Monday, August 22, 2016 at Corvallis Manor. She was born near Monroe, Nebraska to Martin and Louise (Weyen) Mohr. She married Clifford J. Heibel on February 14, 1948 in Lincoln, Nebraska. She moved with her husband and youngest daughter to Oregon in October, 1969. She worked for the Corvallis School district as a cook for 15 years. Betty is survived by her daughters and sons-in-law, Beverly and Dennis Nelson of Columbus, Nebraska; Debra and Daniel Williams of Corvallis; Oregon; grandchildren, Mark (Teresa) Nelson of Bellevue, Nebraska, Michael (Stephanie) Nelson of Blythewood, South Carolina, Erik Nelson of Portland, Oregon, Lorena Nelson (Paul Poewierz) of Columbus, Nebraska, and Kimberly Nelson of Blair, Nebraska. Great grandchildren, Zach and Maddie Gaudette and Sophia Nelson of Bellevue, Nebraska. Sisters, Marcella Herrmann of Arvada, Colorado, Evelyn (Bill) Badje; and a brother, Richard Mohr of Columbus, Nebraska. She was preceded in death by her parents and 5 brothers. No service is planned at this time. A memorial service will be held at a later date in Columbus , Nebraska. Remembrances may be sent in her name to Meals on Wheels.

The family of Elizabeth Lorena Heibel created this Life Tributes page to make it easy to share your memories.