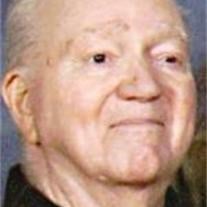 Most recently of Timberhill Place in Corvallis, and formerly of Syracuse, N.Y., Elmer Julian Boice died Sunday following a brief illness. He was 92 years young. He was born in Cortland, N.Y., to Ernest and Libby Morris Boice. Following graduation from Cortland High School, Elmer and lifelong friend Mike Hatcher took a driving tour of the country, where they saw Mount Rushmore being carved, milked cows in Montana, logged pines in Idaho, and arrived at the Pacific Ocean on Elmer's 21st birthday. During World War II, Elmer served in the U.S. Army, where he was a cook and quartermaster. He was preparing breakfast on Diamond Head in Hawaii on the morning of Dec. 7, 1941, when bomb splashes were reported in the harbor, and he was ordered to take shelter in a cave. He survived the attack on Pearl Harbor, and was honorably discharged following the war. Elmer attended Smith Technical School in Syracuse on the GI bill to study refrigeration. He worked for Coca-Cola and Babson Brothers. In 1956, he began working at the new Sylvania data processing center in Camillus, N.Y., as a refrigeration specialist to cool the Univac computer. By the time he retired in 1979, Sylvania had become GTE and then Verizon, and the Univac was an antique. In September 1949, Elmer married Sarah Mae Hatcher. They built a home on Onondaga Hill, and had three children. Sarah Mae preceded him in death in 1956. Elmer enjoyed bowling, golf, photography and traveling. Following retirement, he delivered Meals on Wheels, volunteered on building projects at Onondaga Hill United Methodist Church, wrote memoirs of his Army and road-trip experiences, and spent time with his children. He lived at Summerfield Village in Syracuse for 10 years before moving to Oregon in 2008. Survivors include daughter Marjorie Stevens and husband, Peter, of Corvallis; sons Russel Boice and wife, Mary Ann, of Denver, Colo., and Mark Boice and wife, Susan, of Weedsport, N.Y.; six grandchildren; six great-grandchildren; and several nieces and nephews. Elmer will be remembered for his sweet and friendly disposition, dry sense of humor, and fondness for singing. He was a loving and beloved father. A memorial service will take place at 2 p.m. Sunday, Feb. 6, at First United Methodist Church in Corvallis. The family also plans a memorial service and interment of ashes in June in Syracuse. In lieu of flowers, memorial contributions can be made to the charity of one's choice.

Most recently of Timberhill Place in Corvallis, and formerly of Syracuse, N.Y., Elmer Julian Boice died Sunday following a brief illness. He was 92 years young. He was born in Cortland, N.Y., to Ernest and Libby Morris Boice. Following... View Obituary & Service Information

The family of Elmer Boice created this Life Tributes page to make it easy to share your memories.

Most recently of Timberhill Place in Corvallis, and formerly...