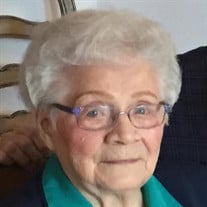 Elsie Sophia Apt, 93, of Corvallis passed away at Samaritan Evergreen Hospice House in Albany on July 4, 2016. Elsie was born in Coleharbor, North Dakota, to William and Sophia (Sayler) Rivinius. She was the third of nine children. When Elsie was 3 years old, the family moved to Ridgeview, South Dakota. The next 22 years were spent growing up on a wheat farm. Elsie received her high school diploma in 1941 from Plainview Academy, Redfield, South Dakota. In 1945, she and two sisters left the Midwest and traveled to Spokane, Washington, by train. They had never seen forested mountains or tunnels and initially felt a bit claustrophobic. Elsie wrote that she counted exactly 28 tunnels. She attended Walla Walla College in College Place, Washington, from 1945 to 1948 and completed her education in 1967 when she received her B.S. in Education from what was known as Oregon College of Education in Monmouth. Elsie met Russell Apt in German class at Walla Walla College. Friendship turned to love and they were married in College Place, Washington, June 8, 1948. They settled in Corvallis and welcomed a daughter, Gloria, in 1949, and a son, Bill, in 1951. The family relocated to Newport in 1955. When Bill started first grade, Elsie began teaching elementary school in Siletz. For four years she took Bill and Gloria with her as she drove the 17 miles around exactly 71 curves (she counted) to get to school on time. When she retired in 1983, she had taught in Siletz, Newport and Waldport for a total of 25 years. After retirement Elsie and Russell moved to Albany in 1986. For eight years they participated in delivering meals for the “Meals on Wheels” program. They also traveled to Canada, Hawaii, Australia, New Zealand, Fiji, Russia, Washington, D.C., and Europe. They celebrated their 50th wedding anniversary taking a Caribbean cruise with their family. Elsie was very active in the Seventh-day Adventist church. She held many offices but serving as organist brought her the most joy. She was preceded in death by her parents, one brother, and two sisters. Survivors include husband, Russell of Corvallis; daughter Gloria Rasmussen (Keith) of Corvallis; son William Apt (Grant Molsberry) of Portland; granddaughters Kamila Hanson (Ryan) of Spokane, Washington, and Rochelle Rasmussen of Lexington, Kentucky; great-granddaughter Kylah Peterson; brothers Edwin (Ruth), Ervin (Betty Jo), and Fred; sisters Ruth Truax Amundson and Dionne Nick (Ed). A family graveside service is being planned at Willamette National Cemetery in Portland. Memorial contributions can be made to Samaritan Evergreen hospice.

Elsie Sophia Apt, 93, of Corvallis passed away at Samaritan Evergreen Hospice House in Albany on July 4, 2016. Elsie was born in Coleharbor, North Dakota, to William and Sophia (Sayler) Rivinius. She was the third of nine children. When Elsie... View Obituary & Service Information

The family of Elsie S. Apt created this Life Tributes page to make it easy to share your memories.

Elsie Sophia Apt, 93, of Corvallis passed away at Samaritan Evergreen...