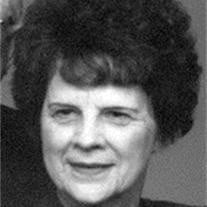 EmmaDell Blanch, 90, died New Year's Day at her daughter's home in Salem after a short illness. EmmaDell Hanson was born Feb. 3, 1919, in Providence, Utah, to Oliver and Emily Maria Maddison Hanson. She was one of two daughters and five sons. She graduated in 1937 from South Cache High School, where she participated in many activities, especially plays and music productions. She attended Utah State University in Logan for two years. She intended to finish her degree, but after her sophomore year, she was offered and accepted a job as a secretary in the Extension Service Office at Utah State. While there, she met Grant Blanch, whom she married on Aug. 25, 1941, in the Logan Temple of the Church of Jesus Christ of Latter-day Saints. She and her new husband immediately left for Ithaca, N.Y., where Grant was to attend Cornell University to obtain a doctorate. While Grant attended school, EmmaDell worked as a secretary at the college. After a one-year stop at South Dakota State College in Brookings, S.D., they arrived in Corvallis in 1945, where Grant had accepted a position in the Agricultural Economics Department of Oregon State College. EmmaDell spent most of her time raising their three children and being active in church responsibilities. The family embarked on a two-year sabbatical leave to Bangkok, Thailand, on Nov. 26, 1955. Oregon State University sent Grant there to establish a department of Agricultural Economics at Kasetsart University. On the way to Thailand and in returning to Corvallis, the family was able to travel around the world, visiting many countries along the way. They finally boarded the SS United States in Southampton, England, and sailed the North Atlantic Ocean before docking five days later in New York, N.Y. EmmaDell was very talented in many areas, including musically. She played the piano and organ for many church events, and weddings and funerals in the Corvallis area. She was an excellent seamstress, quilter and cake-decorator. She spent many years at the Genealogy Library at the LDS Stake Center, in addition to serving in the Portland Temple. Above all, EmmaDell is remembered as a loving and devoted wife and mother. EmmaDell was preceded in death by her husband, Grant, in 1999; and by her parents, sister and three brothers. She is survived by her three children and their spouses, Richard and Diane Blanch of Round Rock, Texas, Douglas and Susan Blanch of Lexington, Ky., and Carol and Ron Flory of Salem; 14 grandchildren; 23 great-grandchildren; and brothers Wilford Hanson of Providence, and Frank Hanson of South Jordan, Utah. A funeral service will take place at noon Friday, Jan. 8, at the Church of Jesus Christ of Latter-day Saints, 4141 N.W. Harrison Blvd. In lieu of flowers, the family suggests remembrance donations be made to Willamette Valley Hospice or the charity of your choice.

EmmaDell Blanch, 90, died New Year's Day at her daughter's home in Salem after a short illness. EmmaDell Hanson was born Feb. 3, 1919, in Providence, Utah, to Oliver and Emily Maria Maddison Hanson. She was one of two daughters and five... View Obituary & Service Information

The family of EmmaDell Blanch created this Life Tributes page to make it easy to share your memories.