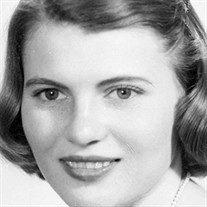 July 19, 1935 — Sept. 20, 2014 Ethel Louise Foster of Corvallis passed away on Sept. 20, 2014, at Legacy Hopewell Hospice House in Portland. Ethel was born on July 19, 1935, in Baltimore, Maryland. She was the youngest daughter of Gerard P. and Clara Gassinger. The Gassingers, descendants of German woodcrafters from Bavaria, Germany, owned a thriving furniture store in Baltimore, known as Gassinger Brothers. Ethel’s father and mother raised a family of six children and Ethel is survived by her youngest brother, Gussie of Ocean City, Delaware. As a child, Ethel spent many summers at the family beach house known as Oliver Beach, and enjoyed eating Chesapeake Bay crab. Ethel was very involved in the Catholic Church and attended Mount St. Agnes High School and Villa Julie College in Baltimore. As a young woman, Ethel met and fell in love with a Merchant Marine and student, Wayland “Bill” Foster Jr. of the Bay Area. After marrying in 1955, Ethel and Bill moved to Portland, where Bill enrolled in law school at Northwestern (now Lewis & Clark) Law School. The young couple settled in Corvallis in 1966 and started a family as Bill finished school. Ethel and Bill raised three girls in Corvallis, and Ethel was a supportive and devoted mother to Elizabeth, Barbara and Suzanne. Adjusting to Oregon wasn’t always easy for the young Marylander, but Ethel always tried to find ways to make things better. She was very involved in St. Mary’s Catholic Church and helped start CCD. As a young mother, Ethel found great joy in being active in the church. Ethel loved da Vinci Days in July, and was fascinated by the creative process that was sparked by imagination and ingenuity. Ethel also was a devoted wife to Bill, helping him with the books and administrative duties as he navigated a career in their own real estate company in hotel and motel sales. Ethel and Bill used to travel extensively throughout the State of Oregon and the Northwest. Ethel loved to garden, decorate, dream and encourage her daughters to make the most of their abilities. She also was very involved in the American Cancer Society, helping to strengthen a local chapter after her first bout with cancer, in 1981. She loved spending time with her family, and is survived by Elizabeth, Barb Macal (Russ), Suzanne, and grandsons Tanner and Justin Macal. She found great joy in encouraging and watching her grandsons’ activities — cheering on the boys at baseball games, or supporting a piano or band recital. Ethel remained active and was determined to live life to its fullest. It was fitting that Ethel died listening to one of Corvallis’ own, Chris Botti, playing “The Very Thought of You,” since Ethel carried fond memories of Chris carrying and practicing his trumpet wherever he went. The family will plan a memorial this spring. Godspeed, dear Mom — you were a fighter and an inspiration to the very end. We love you very much and will never forget you or your journey. Donations in honor of Ethel Foster can be made to the Oregon Master Gardener Program. Send donations to Benton County OSU Extension Service, 4077 S.W. Research Way, Corvallis, OR 97333 (make out checks to Benton County OSU Extension and please indicate “MG program”).

The family of Ethel Louise Foster created this Life Tributes page to make it easy to share your memories.