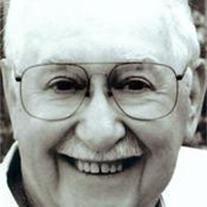 Longtime area resident Frank Derryberry died Monday, Oct. 29, at Corvallis Manor. He was 78. He was born in Parkdale, Ark., to William and Florence Derryberry. He had six brothers and sisters. Frank traveled with his parents to a construction job in Coos Bay where he met and married local resident Hannah lngebritson. While there he transitioned from construction and lumber mill work to owning a service station. In the late 1950’s the service station career brought him to Corvallis. While operating two different Shell stations downtown he built custom cars, and from scratch, a race car that he raced at Lebanon Speedway. He later operated a Texaco station on 9th ~ that included a wrecker service. He built most of the wrecker trucks himself. There was nothing he could not build, fix or restore. In 1975 he married Corvallis resident Jane Matthews. Jane preceded him in death in 2004. His next career was in real estate. He was a salesman and broker for multiple offices in Corvallis. Like his first careers, people knew him for his honesty, smile and laugh. He spent the last six years going to OSU football games, traveling, watching movies and having dinner with his companion, Arvida Moore and a group of their longtime friends. Survivors include sons DeWayne Derryberry of Pocatello, Idaho, Edward Matthews of Portland, Oregon, Frank D Derryberry Jr. of Corvallis; daughters Caroll Butler of Lake Stevens, Washington, Rosie Wylder of Lynnwood, Washington, Kelly Yoder of Canby, Oregon and Cindy Hodgson of Gresham, Oregon; 13 grandchildren and 3 great grandchildren. A service led by Bob Weinberger will be held at 1 p.m. Saturday, Nov.10, at DeMoss-Durdan Funeral Home, 815 NW Buchanan Ave., in Corvallis Oregon. Donations may be made to Benton Hospice Service, 2350 NW Professional Dr., Corvallis, Oregon, 97330.

Longtime area resident Frank Derryberry died Monday, Oct. 29, at Corvallis Manor. He was 78. He was born in Parkdale, Ark., to William and Florence Derryberry. He had six brothers and sisters. Frank traveled with his parents to a... View Obituary & Service Information

The family of Franklin Derryberry created this Life Tributes page to make it easy to share your memories.