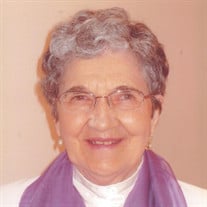 Frieda Emilie Rohl was born on July 11th, 1930 in Sieggraben, Austria to Josef and Theresia Pischof Rohl, the last of six children; three boys, Josef, Wilhelm and Ludwig and three girls, Franzi, Maria and Emilie Frieda. She grew up singing with her sister Maria, both in their parish church choir and with the dance band in which her father and brothers played. Frieda and her sister Maria were known in the area as "Rohl-Sisters singing on the cherry tree" for their habit of climbing in their father's cherry tree orchard and singing. Frieda learned to dance with friends and neighbors in the family home on Sundays to her father's and brothers' brass band. Leaving Austria following the death of her mother in 1948, she worked along with Maria first in Switzerland, England and then finally arrived in the United States in 1955. Their visas were sponsored by their uncle who hired them to work in his factory in Walnutport, Pennsylvania. There she met her husband Romain "Bob" Neeb and they were married on September 19th 1959. She obtained her U.S. citizenship September 2,1966. Frieda's love of beauty was expressed in her oil painting of beautiful landscapes and still life pictures, in her interior decorating of their many homes, in her love of clothing and dressing up and her lifelong love of music, especially Viennese waltzes and sacred music. Frieda and Bob traveled and lived in various states in the USA, including Pennsylvania, Florida, California, Washington, Alaska, Oregon and Hawaii. Frieda and Bob traveled back to Austria several times and finally ended up in Corvallis, Oregon where Bob passed away in Dec.1990 and Frieda on Feb. 28, 2022. Frieda is survived by her nieces and nephews in Austria and her adopted American family, Gerald, Patricia and Christina Steiger of Corvallis, Oregon. Arrangements are pending, please leave condolences for the family on the website.

The family of Frieda Emilia Neeb created this Life Tributes page to make it easy to share your memories.