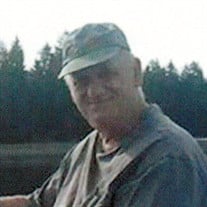 Galen L. Carpenter May 11, 1949- October 3, 2014 Galen Laurel Carpenter, beloved husband, father and grandfather left us suddenly October 3, 2014. Galen was born on May 11, 1949 in Corvallis to Swin C. Carpenter and Irene L. Carpenter. He was the baby of the family having two older brothers and an older sister. He graduated from Corvallis High School in 1967. In 1969, he was drafted into the army and served until 1971. He was stationed in Frankfurt, Germany where he was in the transportation unit. He enjoyed Germany and hoped to return one day for a visit. Galen held several jobs during his life. He started working for Brand S in the plywood mill while he was still in high school. He worked with his Dad building custom homes for a few years and on his Dad’s retirement; he started working at Evanite battery separator division until it closed. He started working for Mid Valley Gravel in 1990, where he worked until his retirement in May 2014. Galen loved to fish above all else. This past summer was spent trout fishing every weekend with his son, daughter-in-law and his five grandchildren. They had a wonderful time and it became quite a competition as to who caught the first fish, the biggest fish and the most fish. He also had a passion for reading and you could find him sitting in his lawn chair on the front lawn reading his kindle most days. He visited with the neighbors as they walked by and made many friends that way. He loved his family and family get-togethers especially Christmas Eve and the yearly Carpenter reunion. Galen is survived by his wife of 36 years, Debbie; his son, Avern (wife, Karen); and his five grandchildren; Summer, Kylie, Nathan, Luke and Ava; his oldest brother, David (wife Gerrie), middle brother, Carl (wife, Mary); sister, Elaine (husband, Earnie Gregory); eight nieces and nephews, their spouses and children. Both of his parents preceded him in death. He will be greatly missed.

The family of Galen Laurel Carpenter created this Life Tributes page to make it easy to share your memories.