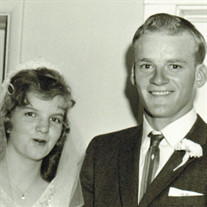 Gary Theodore Jacobson Feb. 21, 1941 — May 23, 2014 Bonnie Jean Jacobson Feb. 27, 1943 — May 23, 2014 Gary Theodore Jacobson, 73, of Corvallis died May 23, 2014. Gary, loving husband of Bonnie Jacobson, passed away of heart failure at his home. Gary retired in 2012 from Weyerhaeuser in Sweet Home. Bonnie Jean Whybark Jacobson, 71, passed away on May 23 while being transported to Good Samaritan Regional Medical Center in Corvallis, approximately 45 minutes after Gary’s passing. They are survived by one daughter, Debbie David (husband Brian); two sons, Alan and Scott; and six grandchildren, all living in the area. Bonnie also is survived by three sisters, Vivian Dudding of Klamath Falls, Dorothy Matthews of Millersburg and Nancy Altishin of Albany. One other sister, Sandra Smith, preceded Bonnie in death in 2010. Gary and Bonnie were married for 53 years. They will be greatly missed by their family and friends. A celebration of life will take place at 11 a.m. Saturday, June 28, at the Philomath Scout Lodge, Inc., 660 Clemens Mill Road, Philomath, OR 97370.

The family of Gary and Bonnie Jean Jacobson created this Life Tributes page to make it easy to share your memories.