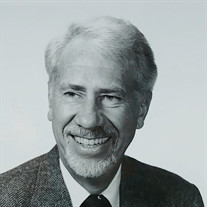 George Keller, beloved husband, father, friend and community volunteer, passed away after a short but valiant health battle with family by his side on October 12, 2018. George was born on September 9, 1931 to George and Eva Keller, in Hartford, Connecticut. Both of George’s parents were originally from Copenhagen, Denmark. George remained proud of his Danish heritage maintaining close ties with extended family throughout life and was also active in a Danish fraternal organization in the United States for over 65 years. George and his parents lived in Wethersfield, Connecticut and it was there while in elementary school, that George met his wife Suzanne Bray. George attended schools in Connecticut, Utah, and California prior to receiving a PhD in Oceanography from the University of Illinois. George’s career path included a period of time with a civilian position with the Office of Naval Research. George moved his family to Miami, Florida, where he headed up a research lab at NOAA. George continued his career with a move to Corvallis in 1975 to join the faculty of the College of Oceanography at Oregon State University. George became Vice Provost of Research and International Programs. George managed a rapid expansion of research funding for the university during his tenure. He retired from OSU in 1996. Throughout his life, George had a great appreciation for the natural world and developed a deep love of Oregon for its natural beauty and its people. A world traveler, George cherished most time spent at the family cabin on Crescent Lake. George is survived by his beloved wife of 63 years, Suzanne Keller, and his two children—Mark Keller of Corvallis and Lauri Keller of San Diego CA. A Memorial Service will be held at 3 p.m. on Tuesday, October 30 at Grace Lutheran Church in Corvallis. In lieu of flowers, the family requests donations be made in George’s name to the Benton Community Foundation. (www.bcfgives.org). Please share your thoughts and memories for the family at www.demossdurdan.com

George Keller, beloved husband, father, friend and community volunteer, passed away after a short but valiant health battle with family by his side on October 12, 2018. George was born on September 9, 1931 to George and Eva Keller, in Hartford,... View Obituary & Service Information

The family of George H. Keller created this Life Tributes page to make it easy to share your memories.