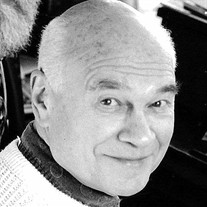 Georges Lifermann was born on February 28, 1922, in Paris, France. The oldest of three sons (Georges, Roger and Lucien) of Moise and Anna (Weina) Lifermann. Georges enjoyed a happy childhood with his parents and close relatives but World War II brought many hardships to the family. Georges worked as a mechanical designer until being drafted by the French Army , then the TODT, a German engineering organization that used young Frenchmen for forced labor. The work was on the Atlantic wall: concrete structures designed to prevent easy land access by allied forces. He managed to escape the work site and was hidden for three months by the resistance before acquiring false papers. His parents and brother, Roger, were deported in 1944. Tragically, his parents died in the gas chambers in Auschwitz and his brother, Roger, died somewhere in Austria. Georges was able to protect Lucien, by keeping him hidden on a farm. After the war (1946) Georges married Madelaine Parel and they began their life together in Paris where their two sons, Michel and Daniel were born. Georges had played the piano since he was six and always wanted to write music. Winning third prize in a competition in 1946 helped him make connections to advance his career. Playing in piano bars and accompanying singers provided income during the early stages of his work as a composer. Gradually he became successful, composing over 1,000 songs, many of which were recorded. Among these were songs for Yves Montand, and other artists and songs for children, including “Sacre Charlemagne” which became very popular and is still well known in France. “Guitar Tango” written for the British group, The Shadows was also a big hit. He wrote operettas and musicals, the most popular being Nini La Chance which was performed 500 times in France. A final musical production was the lavish operetta, Scaramouche. After Madeleine’s death in 1986, Georges retired and stopped writing music. In 1989, he met Marilyn Miller at a concert in Florence, Italy and they were married in Corvallis in 1995. Marilyn introduced Georges to members of the French Conversation Group, musicians on campus, and French teachers at the high school and OSU. He resumed writing songs, with Albany lyricist, Barbara Callner, many of which were performed in fundraisers for UNICEF, the OSU child care center and Old Mill Center. He collaborated with the singer/songwriter Jon Ten Broek and others and he and Marilyn wrote songs together for their wedding, His desire to write something for the Majestic Theater led to the creation of “The Smile,” a musical mystery about the Mona Lisa which was presented during da Vinci Days in 1996 and 1997. Georges died at home on March 25, 2018 and is survived by his wife, Marilyn Miller, brother Lucien (Francoise), his sons, Michel (Claudine) and Daniel (Catherine), three step children, Philip (Lingzhou) Canfield, Stephen Canfield , and Meghan (Mark) Laws, four grandsons, one granddaughter, and two great granddaughters. A celebration of his life will be held at the First Congregational United Church of Christ at 4515 SW West Hills Road in Corvallis on Saturday, April 28, at 4:30 PM. Donations in Georges’ memory may be sent to Chamber Music Corvallis, P.O. Box 962, Corvallis, Oregon 97339.

Georges Lifermann was born on February 28, 1922, in Paris, France. The oldest of three sons (Georges, Roger and Lucien) of Moise and Anna (Weina) Lifermann. Georges enjoyed a happy childhood with his parents and close relatives but World War... View Obituary & Service Information

The family of George Lifermann created this Life Tributes page to make it easy to share your memories.