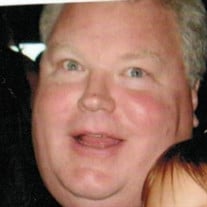 George Wayne Mickenham J. was born March 7, 1962 in Corvallis, OR and passed away in Springfield, OR on April3, 2017. George graduated from Corvallis High School where he and his friends were regularly spotted playing kazoo in the stands for the CHS football games. George loved all kinds of sports, both as a spectator and participant. The 2017 NCAA final game occurred the day of his death, which reminded his family he played A-league intramural basketball at Linfield with Mark Few. George played basketball and softball for many years and was still enjoying bowling and golfing. George was a dedicated Beaver fan, even after moving to Springfield, and attended most OSU football games, win or lose. George spent his career in the restaurant business working at Artic Circle, Campus Hero and Clodfeltters and even tried his hand at his own bar, OM II, and loved to have a beer with his friends, especially if it was Miller Lite. George had been working for Jackson’s service stations and just passed his 10 year service award and is remembered by all as friendly, and providing high level customer service. George was married to Erin Hope in 2001 and divorced the next year. He is survived by his mother, Deanne Mickenham of Corvallis; his father, George Wayne Mickenham Sr. & Martha of Philomath. Siblings, Sally Palmiter of Gresham, Sheryl & Lowell Wetzel of Salem, Julie & Rusty Lorenz of Fairfax, Virginia, Greg Mickenham of Philomath, John Mickenham of Corvallis, Jim & Debbie Mickenham of Vancouver, Washington; step- siblings, Jacqie Taylor of Corvallis, John Edwards of Bellingham, WA, and 11 nieces and nephews. George was an organ donor and would encourage others to add their name to the donor registry or make donations in his name to the Humane Society. There will be a private memorial on Wednesday, April 12, 2017 All family and friends are invited to a Celebration of Life at the Elks Lodge, 1400 NW 9th St, Corvallis, starting at 3:00 pm also on Wednesday. Please share your thoughts and memories for the family at www.demossdurdan.com

George Wayne Mickenham J. was born March 7, 1962 in Corvallis, OR and passed away in Springfield, OR on April3, 2017. George graduated from Corvallis High School where he and his friends were regularly spotted playing kazoo in the stands for... View Obituary & Service Information

The family of George Wayne Mickenham Jr. created this Life Tributes page to make it easy to share your memories.