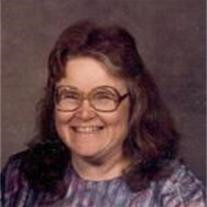 On September 18, 2010, Georgia Edith (Looney) Owen, of Corvallis died suddenly in her sleep, at the age of 69. Georgia was born in Portland, Oregon on December 14, 1940, to George and Mildred Looney, and comes from a long-line of Linn County and Oregon City families (Looney & Roake). A lifelong Oregonian, Georgia was raised in Sherwood, where her family ran Looney’s Market. Georgia graduated from Sherwood High School in 1959. Georgia married Bobbie D. Owen on September 25, 1960. The couple first settled in the Beaverton and Aloha areas, outside of Portland, where Georgia worked for Tektronix, and drove school bus for West Hills Christian School. In 1974, after the birth of her four sons, the couple moved to Corvallis where Georgia resided until her death. In Corvallis, Georgia gave birth to her daughter, and worked for Hewlett Packard until 1999. She also worked part-time for Hughes Excavating in Philomath. She was a member of the Church of the Nazarene in Philomath. Georgia was generous with her time, and always willing to help others. She would stop everything if someone needed something, and if she couldn’t do it herself, she would get on the phone and find someone who could make it happen. Despite many challenges she always soldiered on. Georgia loved many activities, including walking on the beach, bargain shopping, and in recently years spending time with friends at Thousand Trails campgrounds. But, most of all, she loved being a mother. Georgia is survived by her children and their families, including Bobbie A. Owen of Meridian, Idaho, Edwin and Marina Owen of Astoria, Oregon, John Owen of Eldersburg, Maryland, Chung-Hui Sun of Millersburg, Oregon, Alan Blanche of Eldersburg, Maryland, James and Kari Owen of Salem, Oregon, Barbara and Edwin Werre of Keizer, Oregon, and grandchildren Hannah, Chii-Hui, Tamara, Chii-Lien, Chii-San, Kathy, Alex, Kimberly, Kristina, and Linnea; and, 7 great-grandchildren. She is also survived by her brother Joseph Looney of Walport, Oregon. She was preceded in death by both her parents, her older brothers, James Looney and John Withee, her sister Lucille Cady, and her grandson John Alan Werre. Family and friends are welcome to attend graveside services at Locke Cemetery in Lewisburg, Oregon, on Monday, September 27, at 1:00 pm, and memorial service at the Church of the Naz

On September 18, 2010, Georgia Edith (Looney) Owen, of Corvallis died suddenly in her sleep, at the age of 69. Georgia was born in Portland, Oregon on December 14, 1940, to George and Mildred Looney, and comes from a long-line of Linn County... View Obituary & Service Information

The family of Georgia Owen created this Life Tributes page to make it easy to share your memories.