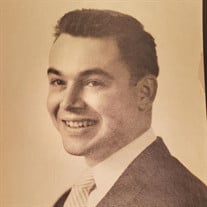 Gerald N. (Jerry) Holdgrafer, 85, formally of Corvallis, passed away peacefully on December 16, 2020 at his home in Portland, OR. Jerry was born on June 20, 1935 in Donnelly, MN to Laura and Norbert Holdgrafer, joining sister Virginia to make a family of four. Three years later, Norbert and Laura sold their farm in Minnesota to take a chance on new opportunities in Oregon where Laura’s brother was living. The young family made the trip west, settling in Sheridan, Oregon. Jerry graduated from Sheridan High School in 1953 and enrolled at Oregon State University that fall, pursuing an engineering degree in Forestry. Upon graduating from OSU in 1957, Jerry joined the U.S. Navy, heading to Officer’s Candidate School in Newport, RI. He ultimately became an Explosive Ordnance Disposal technician, with training taking him to Key West, FL for a short time. During his time in the Navy he did a 6 month tour of the Mediterranean aboard a mine sweeper, with stops in Morocco, Greece, Italy, Turkey, France and Spain. After serving his time, Jerry left the Navy in 1960, making his way back to Oregon via Route 66 to start his career with the Forest Service, which would take him all over the Pacific Northwest over the next 30 years. While living in Shelton, WA he met his future wife, Victoria, in the late 1960’s through a Catholic young person’s group both they belonged to. Eventually, Jerry and Vickie turned friendship into romance, and married on June 28, 1969 in Tacoma, WA at St. Leo’s Catholic Church. They settled in Grants Pass, OR, were Jerry had accepted a new job within the Forest Service. After a few years there, they moved to Eugene, OR and in January 1975 welcomed daughter Marylyn. The next stop with the Forest Service was Colville, WA, but that was short lived in 1979, for only 10 months, as Jerry landed the job he really wanted in Corvallis, OR, so the family picked up stakes again and arrived in Corvallis in November 1979. Jerry and Vickie welcomed a son, Joseph, in May 1981. The Forest Service career continued with the Siuslaw National Forest until his retirement in 1990. After retirement, Jerry consulted on projects with the Willamette National Forest, spent time as a stockbroker and eventually became a mail truck driver at OSU, which he enjoyed very much, as OSU was such a big part of his life. Jerry was very involved in local sports, both Corvallis High School and Oregon State University. He and Vickie were very loyal supporters of the community, and you could go to any football, baseball or basketball game and find them there – Jerry keeping score, or Vickie doing the 50/50. The American Legion Star Spangled baseball tournament in the summer was a highlight and you could find them at almost every game. If it was OSU baseball, and you heard a very loud “RBI TIME!!”, that was Jerry bringing the boys home. He was preceded in death by his beloved wife, Vickie. Jerry is survived by son, Joseph, of Portland, OR, daughter and son-in-law, Marylyn and Matthew Dicinoski, of Kirkland, WA and grandsons Gavin and Thomas, also of Kirkland, WA, sister, Virginia Nokleby, of Salem, OR, nieces Vickie Nokleby and Lori Nokleby, both of Salem, OR, niece Jan Braden of Dallas, OR, brother and sister in law, Larry and Roby Edlund, of University Place, WA, niece Jennifer Edlund of Seattle, WA and nephew Philip Edlund of Tacoma, WA. A rosary will be held on Wednesday, December 30, 2020 at 10:30 am at St. Mary’s Catholic Church, 501 NW 25th Street, Corvallis, OR,, followed by Mass of Christian Burial, also at St. Mary’s, at 11:00 am. Private burial with the family will be later in the day where Jerry will be laid to rest next to his beloved wife, Vickie.

Gerald N. (Jerry) Holdgrafer, 85, formally of Corvallis, passed away peacefully on December 16, 2020 at his home in Portland, OR. Jerry was born on June 20, 1935 in Donnelly, MN to Laura and Norbert Holdgrafer, joining sister Virginia to make... View Obituary & Service Information

The family of Gerald "Jerry" Holdgrafer created this Life Tributes page to make it easy to share your memories.