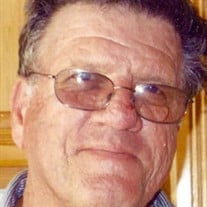 March 19, 1946 – May 10, 2015 “Wanted: Log Truck Driver in Heaven.” Jerry answered! Gerald Wayne Schmidt of Philomath passed away on Sunday, May 10, at home, surrounded by his family. He was born to William and Pearl Schmidt on March 19, 1946, in Salem. Jerry graduated from Stayton High School in 1964 and attended Lane Community College. He married Marilyn Baumann on May 28, 1969, in Corvallis; except for three months in Stayton and seven years in Corvallis, Jerry lived the rest of his life in Philomath. Jerry is survived by his wife, Marilyn; daughter Lyn Johnson and husband, Steve, of Philomath; daughter Lori Schmidt of Coos Bay; grandson, Jax Johnson, and granddaughter, Jaide Johnson, of Philomath; canine companion, Kacey; mother, Pearl Schmidt of Eugene; brother, Ken Schmidt (Valerie) of Sublimity; sister, Janet Schmidt of Eugene; and numerous nieces and nephews. He was preceded in death by his father and many longtime friends. Jerry spent his career working outside. He delivered fuel/oil to customers throughout the local area for more than 30 years. In 1988, he bought the love of his life: a self-loading log truck. Every day after that he would get up and go play. Even when it was difficult for him to climb up on the loader, or have to rely on help from others, he loved his truck. Not many people can say they love their job come rain or shine! After his health caused early retirement, Jerry became a culinary expert, cooking up dishes with his own little secret ingredients. His wife will miss the Sunday morning breakfast in bed he loved to serve. Always the talker, he greatly enjoyed interacting with his Facebook friends, his Monday/Wednesday/Friday 7 a.m. GSM cardiac rehab group, his Tuesday Lunch Bunch, Saturday morning breakfasts with his buddy Lee, and Thursday night Shop Guys. Jerry loved his family, and his biggest disappointments in leaving this life were that he would not be able to go on a NASCAR race trip this fall with his daughter Lori, and, most of all, that he would miss out on watching his grandkids grow up. He was one proud grandpa! Jerry belonged to the Moose, Elks and Eagles fraternities; the Oregon Hunters Association; the Oregon Loggers Association; and the International Society of Packrats. A celebration of life will take place at 11 a.m. on May 30 at DeMoss-Durdan Funeral Home in Corvallis. Donations can be sent to the Philomath Volunteer Fire Department.

The family of Gerald Wayne Schmidt created this Life Tributes page to make it easy to share your memories.