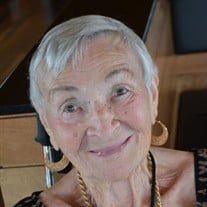 Gertrude (Trudi) Davidson Timpone, of Tangent, Oregon, peacefully passed away July 14, 2018 at Samaritan Evergreen Hospice House in Albany, surrounded by her family. She was proud that she was living a very healthy and viable life at 102 years old. She was born of Russian-Romanian immigrants on May 17, 1916 in Brooklyn, NY and raised in Brooklyn and in Mineola, Long Island, NY. The middle child of Joseph and Rose Ornstein Davidson, she had two sisters, Florence Davidson Mischel and Leah Davidson Cayton. All preceded her in death. She worked in the Cosmetic Sales Industry most of her young life until she joined the Woman’s Army Auxiliary Corps in 1942. Stationed in Sacramento, California, she built radios for the war effort and was honorably discharged in September 1943. It was there she met her husband, Ted Timpone, while studying radio math at McClelland Field in Sacramento. She and Ted raised three children and made their homes in Sacramento, San Jose and La Habra, California. Following the death of her husband in 1966, she worked for Trans World Airlines (TWA) in International Reservations and Group Tour Sales for sixteen years. Not quite ready for retirement at the age of 66, Trudi went on to work another nine years as Sales Manager and Vice President of HellasTours, a Greek tour company. Finally at the age of 75 she retired from the travel industry and moved to Corvallis, Oregon. She became an avid world traveler, filling 8 passports, visiting over 50 countries, including 12 cruises—the last two at 100 years old. She loved to entertain and was always happy to host a party. After moving to Oregon in 1991 she remained active in sorority and volunteer work for the next twenty years. She belonged to Beta Sigma Phi and served as President, Treasurer and Historian. She delivered Meals on Wheels, volunteered at Good Samaritan Hospital, and was an active member of the Corvallis Arts Guild (serving as Treasurer and President), Friends of the Library, the Corvallis ArtsCenter, and Corvallis NewComers. These organizations brought her many close friendships that have lasted to this day. She was a voracious reader of mystery novels and took up oil painting late in life, often referring to herself as another Grandma Moses. She had an incredible memory and sharp mind, and at 101 years old she took a writing class to document her life stories and experiences—many that her children had never heard. As matriarch of the Davidson-Timpone family and the last remaining member of her generation, she celebrated her 100th Birthday in 2016 in style—the last to leave the dance floor. She is survived by her three children David and wife Kathy of Auburn, California; Frances and husband George Weppler of Brownsville, Oregon; and Joanne and husband Seaton McLennan of Tangent, Oregon. She adored her seven grandchildren Jeff Timpone, Julie Timpone, Lisa Timpone, Rachel Henney and husband Joseph, Sarah Harris and husband Jason, Ted Weppler, Isaac McLennan and wife Stephanie. Her greatest joy was living long enough to know her five great grandchildren (who called her GiGi) Jourdynn Weppler, Cole and Leo Harris, Terra and Lily Henney. Her sixth great grandchild, Baby Girl McLennan is due this month. Above all else, Trudi was all about family and she extended this warm and welcoming spirit to her friends and her family’s friends. Everyone that knew her, loved her. No memorial service is planned however the family intends to celebrate Trudi’s life on her 103rd birthday next May. Trudi would be honored by any donation in her name to the Corvallis ArtsCenter or Benton County Public Library.

Gertrude (Trudi) Davidson Timpone, of Tangent, Oregon, peacefully passed away July 14, 2018 at Samaritan Evergreen Hospice House in Albany, surrounded by her family. She was proud that she was living a very healthy and viable life at 102 years... View Obituary & Service Information

The family of Gertrude D. Timpone created this Life Tributes page to make it easy to share your memories.