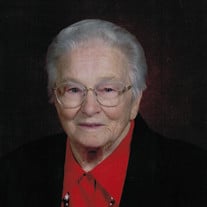 Gladys Bell Hill – Nordyke – Wilson Born March 3, 1915 Passed December 25, 2016 Gladys was 101 years old. She was born in New Truxton, Missouri to Random and Cora Bell Monroe Jennings. She married Hubert Hill in 1931 and moved to Mexico Missouri in 1938. They were divorced in 1940. Gladys and her two children moved with another family to Corvallis, Oregon in November 1939. It was with this family that Gladys started attending the Nazarene Church with her children, Gary and Helen. She joined the Nazarene Church in 1940 and has been a member all these years. She worked at many different jobs, in 1942 she worked for McDonald Candy Company driving a delivery truck for three years and book keeper for two years. She also worked for Lew’s Super Market until she met Jess Nordyke. They were married December 25, 1948 and had one child Donna Bell in 1951. Jess passed away in 1970. She then worked for The Clothes Tree in Corvallis for several years. Gladys married Bill Wilson Sr. in 1974. Bill passed away in 1992 Gladys had many hobbies. She loved being in the woods, hunting, fishing, and going to the coast. She loved the ocean. She hunted deer until she was 86 years old and decided it was time to quit. She gave her gun to her Grandson, Dennis. He had asked several years earlier if some day he could have her 30-30. Gladys loved to travel, she and her daughter Helen took several cruises and many other trips. She and her daughter Donna Bell took a trip to London and later to Florida to visit her Grandson, Dennis in the Air Force. She and eight members of her family have gone on two cruises the last few years. Survivors are: Daughter, Donna Bell Nelson of Boise, Idaho, Bud Nordyke of Albany Oregon, Paul Wilson of Corvallis Oregon, and Bill Wilson Jr of Sweet Home, Oregon. She is also survived by a wonderful blended family of children, grandchildren, great grandchildren, and great-great grandchildren. Gladys was preceded in death by her Daughter Helen Campbell, sons Gayle Nordyke and Gary Hill, her brothers, sisters, and numerous beloved step children. Services with be held at McHenry Funeral Home, 206 NW 5th Street, Corvallis, 12 Noon, Friday, December 30, 2016. Graveside services will follow. In lieu of flowers, donations can be made to Samaritan Village 285 NW 35th Street, Corvallis OR, 97330. Please share your thoughts and memories for the family at www.demossdurdan.com.

The family of Gladys B. Wilson created this Life Tributes page to make it easy to share your memories.