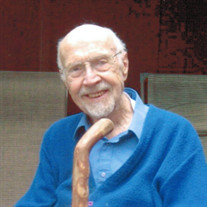 Glenn Edwin Clark March 16, 1920 — March 9, 2016 On Wednesday, March 9, 2016, Glenn Edwin Clark went to be with his Lord. Glenn is survived by three children, Susan Ondiak (Wayne) of McLean, Virginia, Mike Clark (Wren) of Newport and Jane Fuller (Richard) of Vienna, Austria; nine grandchildren and 11 great-grandchildren. He was preceded in death by his wife, Vera, and daughter Juliann Bartow. Glenn was the youngest of nine children born to Irene and Edwin Clark in the Park Center community near Elgin, Nebraska, on March 16, 1920. He grew up in the Sand Hills on a farm in a close knit, loving family where social life centered on the family, the rural church and school. His family endured the economic depression and Dust Bowl of the 1930s. After 10 years of rural schooling he graduated from Elgin High School in 1937. Glenn was able to pursue further education with the support of his sisters and completed a Bachelors of Arts in Music Education from the University of Nebraska, Lincoln in 1941. His first job was teaching music in Hyannis, Nebraska. There he met his future wife, Vera Anderson, a newly hired elementary teacher. In December of 1941, Glenn enlisted in the Army Air Corps for aviation cadet training that he completed in June of 1943. On July 22, 1943, Glenn and Vera were married in the Methodist Church in Fairmont, Nebraska. They were devoted to each other for the next seventy and one half years! After three years as a navigation instructor in B-29s, Glenn completed his military service in 1946 as a 1st Lieutenant. They moved back to Nebraska where Glenn received a Masters of Arts in Music Education from the University of Nebraska. In 1948 he began teaching band and choir in Aurora public schools, where the family lived for the next 12 years. In 1960 Glenn accepted an administrative counseling and guidance position in Laramie, Wyoming Public Schools. In 1965, he received a PhD in Educational Counseling from University of Wyoming. The family then moved to Clark Air Force Base, Philippines, where Glenn was Director of Department of Defense Schools in the Philippines and Taiwan from 1965 to 1968. In1968 the family moved to Corvallis where Glenn became professor in the College of Education at Oregon State University teaching courses in guidance and counseling. He also served as dean and department head and retired as Professor Emeritus in 1987. He was a member of Oregon Counseling Associative and Symphonia Music Fraternity. Faith, family and music were his life-long passions. The family joined the First Baptist Church, Corvallis in 1968 where Glenn served faithfully as choir director, teacher, Deacon, and a member of the Leadership Board. Glenn’s deep, abiding faith was central to his life. Glenn was a gifted musician with a rich baritone voice. He instilled a love of music in his students and family. He was a devoted husband and father who spent quality time with each of his children, grandchildren and great-grandchildren. As an adventurous traveler, avid reader and storyteller, he maintained a love of life and valued his rich Christian heritage. His family and friends enjoyed his marvelous sense of humor, wit and generosity. Glenn and Vera made lasting friendships wherever they lived. Their home was always open to students and friends and they were respected as role models by many. A memorial service in Glenn’s honor will be at 2 p.m. Friday, March 18, at the First Baptist Church, Ninth and Monroe in Corvallis. Donations may be made to Benton Hospice Service (www.bentonhospice.org). Please share your thoughts and memories for the family at www.demossdurdan.com.

The family of Glenn E. Clark created this Life Tributes page to make it easy to share your memories.