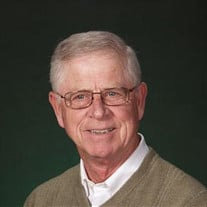 July 26, 1941 — December 31, 2017 On December 31, 2017, we lost a man who was a husband and father, a grandfather, and a coach and teacher, after a battle with lung cancer. Gordy graduated from Storden High School, Class of 1959, and Gustavus Adolphus College, Class of 1963, where he met his wife Sharon. They married in 1963. A business education teacher and coach, he worked in Minnesota’s Pipestone School District, Trimont School District, and Orono School District. From 1974-2003, he taught and coached San Diego’s Grossmont Union High School District. His teams at Granite Hills High School won three CIF Championships (1977, 1994, and 1998). In 1998, Baseball America and USA Today ranked his Eagle team number one in the nation. At one time, he had five former players playing at the major league level. In 2002, Gordy was inducted into the San Diego Hall of Champions as a Coaching Legend. He and Sharon retired to Corvallis in 2003, and he concluded his coaching career, working with the Corvallis High School baseball program. Born in the year of DiMaggio’s “Streak” and “Citizen Kane,” he witnessed so much and contributed so much to so many. We will all miss him deeply. He is survived by his wife of 54 years, Sharon; daughter, Dana, and her husband Randy McCray; son, Brad and his wife, Christine; two grandchildren, Jake and Phoebe; and countless hundreds of former students and players, on whom his influence will never be forgotten. A memorial service will be held at 2 p.m. on Saturday, February 10 at the First United Methodist Church of Corvallis. In lieu of flowers, the family would prefer a donation in Gordy’s name to the Corvallis Benton County (CBC) Friends of the Library.

The family of Gordon R. Thompson created this Life Tributes page to make it easy to share your memories.