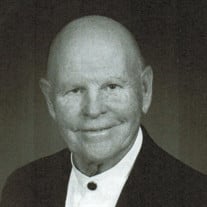 Gordon Ellis Tjernlund was born in Minneapolis, Minnesota on July 9, 1924 to Ellis and Mildred Tjernlund. He and Mary were married 41 years and together have six children, Marie (Chris), Sue, Wes, Tim, George (Diana) and John (Brenda); they have nine grandchildren, Zach, Tyler, Scott, Dillon, Garrett, Ily, Nicole, Joseph, Jacob and many great grandchildren. Gordon’s only sister, Betty is deceased. Her served two and a half years in the Air Force during WWII in the China, Burma and & India Theater. Following his military service he sang in a gospel quartet on the radio six days a week for four years. He received a Bachelor of Science degree from the University of Minnesota, a Master of Music Education degree from the University of Oregon, and as Administrative Certificate. He was a music supervisor of the public schools in Fairmont, Minnesota, teaching there 4 years. He taught high school vocal music in McMinnville for 9 years, followed by teaching at Highland View Jr. High in Corvallis, and was choir director at Crescent Valley High School. After having taught 33 years, he retired as a full-time teacher in 1983. He continued to substitute in 32 schools in music for many years because he enjoyed music education. He taught for a total of 50 years. Gordon served as president of the Corvallis Education Association, president of the Oregon chapter of the American Choral Directors Association, state chairman of the Oregon Music Educators Association, and president of the Corvallis-OSU Music Association. He was a life member of the National Educators Association. He had several music publications. He adjucated international, national, state and district large group and solo contests. He was on the Adjudication Panel of Johnny Mann’s, “The American Choral Festival” with Norman Luboff, Henry Mancini, Ralph Carmichael, Fred Waring and other renowned musicians. At the 1981 National Convention of the American Choral Directors Association in New Orleans, his Crescent Valley High School Men’s Chorus sang and was honored as the best high school men’s chorus in the nation. His choirs competed in other states and won many first place trophies. He recruited an adult choir that sang in Carnegie Hall in New York City. For ten years he was the Director of the State OSAA Choral Contest at LaSells Stewart Center on the Oregon State University campus. On October 16, 2000, he was awarded the Distinguished Service Award by the Oregon School Activities Association from service to Interscholastic Activites. He was Director of Music at First Baptist Church of Corvallis for many years and while there organized the nearly monthly Christian Artist Concert Series and The Corvallis Choir Festival which ran for 12 years with various churches as hosts to multiple church choirs joining for annual concerts. He directed Town Choir, and was founding director of Travelin’ Gospel Singers, Sonshine Singers, Master’s Men, and O.K. Chorale. For several years he volunteered at various prisons and enjoyed helping the inmates sing in choirs with “God’s Word in Song”. His joys are the Lord, Mary, family and friends, especially golf buddies! Family and friends are invited to a Memorial Concert by “The Master’s Men” in Gordon’s honor, 3:00 pm, Sunday, October 14, 2018 at the First Baptist Church, 125 NW 10th Street, Corvallis. Please share your thoughts and memories for the family at www.demossdurdan.com

Gordon Ellis Tjernlund was born in Minneapolis, Minnesota on July 9, 1924 to Ellis and Mildred Tjernlund. He and Mary were married 41 years and together have six children, Marie (Chris), Sue, Wes, Tim, George (Diana) and John (Brenda); they... View Obituary & Service Information

The family of Gordon E. Tjernlund created this Life Tributes page to make it easy to share your memories.

Gordon Ellis Tjernlund was born in Minneapolis, Minnesota on...