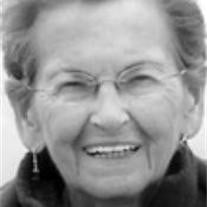 Corvallis resident Grace Weisel died Saturday at Good Samaritan Regional Medical Center in Corvallis. She was 82 years old. She was born in Milwaukee, Wis., to parents of Norwegian and German descent, Howard and Norma Sanderson, and was the fourth of five children. Grace lived her first 74 years in southern Wisconsin, and it was there that she began her lifelong commitment to volunteerism. As a child of the Depression era, she was thrifty, hardworking and generous to friends and strangers alike. Her early married life was dedicated to raising five children, but also included belonging to a bridge club and planting vegetable and flower gardens at the family's lake home. She had an eye for beauty in all that she did. Moving to Oregon in 2003 was the start of a grand adventure for Grace. She absolutely loved road trips to the coast and Cascade Range. She discovered mochas, salt spray and rock collecting. Grace lived at Samaritan Village, serving on various committees and helping to maintain the Village's extensive flower gardens. She also volunteered at the Corvallis-Benton County Public Library. In her limited spare time, she was an avid reader. Although she had had a series of health problems over the last couple of years, the stroke that ended her life came without much warning. At 82, her spirit for life was much greater than her tiny and frail body would suggest. She will be greatly missed. Grace and her family embraced the motto "Life Is Good," which became their toast at each family function. That memory and her legacy of love will live on with her family and others who were fortunate enough to have known her. Survivors include brother Howard and sister-in-law Barbara of Dover, Mass.; daughters and sons-in-law Nancy Weisel of Eugene, Judith and Larry Loizzo of Janesville, Wis., and Amy and Mark Danielson of Duluth, Minn.; sons and daughters-in-law Sanderson d'Salix of Portland, and Mark and Heidi Weisel of Corvallis; grandchildren Ani, Ryan, Dana, Kathryn, Elizabeth, Greta, Luke and Jack; and numerous nieces and nephews. A celebration of her life will take place at 10 a.m. Sunday, Jan. 15, at DeMoss-Durdan Funeral Home. Attendees are encouraged to wear "Life Is Good" shirts in honor of Grace.

Corvallis resident Grace Weisel died Saturday at Good Samaritan Regional Medical Center in Corvallis. She was 82 years old. She was born in Milwaukee, Wis., to parents of Norwegian and German descent, Howard and Norma Sanderson, and was the... View Obituary & Service Information

The family of Grace Weisel created this Life Tributes page to make it easy to share your memories.