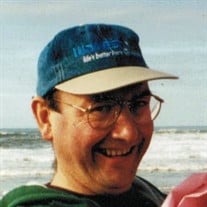 Gregory Arthur Fuchs January 19, 1958- August 9, 2014 Gregory A. Fuchs died Saturday, August 8, 2014 at his Corvallis home. He was 56 years old. He was born in Las Vegas, NV, Jan. 19, 1958 to Arthur and Mary Allison Fuchs. He grew up in Las Vegas finishing school at Vo-Tech studying electrical. He went on to work Las Vegas shows, and conventions as a stage hand. He even worked with David Letterman when he performed in Las Vegas. Gregory moved to Coos Bay, Oregon in the late 80’s where he met his wife, Heidi. They married in 1993 and moved to Corvallis. He worked as a lineman, network technician at CenturyLink, until his passing. He enjoyed spending time with family and friends, watching football and racing, playing fantasy football, playing video games with his kids, watching movies and serving the Lord. He was celebrating 15 years sobriety. He is survived by his wife, Heidi; daughters, Marissa, Anna and Abby Fuchs; sons, Brian Fuchs and Gregory Gerdes; cousins, CeCi McKinnie, Betsy Leal, Mary Kilcullen and one grandchild. Friends and family are invited to A Celebration of Life is at 1:00 pm, Saturday, August 16, at McHenry Funeral Home, 206 NW 5th Street, Corvallis. You are invited to share your thoughts and memories for the family at www.demossdurdan.com

The family of Gregory Arthur Fuchs created this Life Tributes page to make it easy to share your memories.