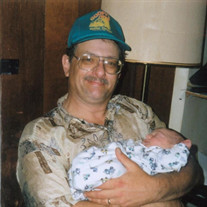 Gregory Stanton Jackson died peacefully in his sleep on April 11, 2022, at his brother Jeff’s house, after a battle with colon cancer. Greg was born on October 28, 1960 in North Ridge, California to Maury Gene Luck and Jean Lois Ward Lawyer Luck. The family moved to Eugene, OR early in 1964. Greg attended school in Junction City, Bellfountain and Corvallis. His father Maury died in 1966 and his mother remarried later that year to Stanton Leon Jackson. Several years later Greg and his two older siblings were adopted by Stanton. Greg married Melinda Arnsdorf on August 26, 1989. They have one son, Joseph, who was born in 2002. They divorced in 2016. Greg loved working on cars and computers, and he was a huge fan of Nascar and Dale Earnhart, but mostly what he loved the best was being a stay at home dad to Joe. Joe was the light of his life. Greg was so proud of him. Greg is survived by his son Joseph, his ex-wife Melinda, his brothers William Lawyer and Jeffrey Jackson Sr. and his wife Julie Jackson, his sister Carole Jackson Parker and her husband Clinton “Buster” Parker. He is also survived by nephews Nathan Lawyer, Jeffrey Jackson, Jr., Sam Hunt, Malcom Hunt, Bryce Winters and nieces Ruth Lawyer Noor and Rayna Lawyer Sullivan. He was preceded in death by his birth father Maury Luck, his mother Jean Jackson, his adoptive father Stanton Jackson, sister Sherice Jackson Hunt, brother Raymond Lawyer, sister Darlene Jackson Winters and nephew Shawn Lawyer. A celebration of life is planned for May 28, 2022 at 1pm at his brother, Jeff’s house at 28168 Hwy 99W, Corvallis, OR 97333. A BBQ luncheon will follow. DeMoss-Durdan Funeral Home and Crematory is in charge of the arrangements.

Gregory Stanton Jackson died peacefully in his sleep on April 11, 2022, at his brother Jeff&#8217;s house, after a battle with colon cancer. Greg was born on October 28, 1960 in North Ridge, California to Maury Gene Luck and Jean Lois Ward... View Obituary & Service Information

The family of Gregory Jackson created this Life Tributes page to make it easy to share your memories.

Gregory Stanton Jackson died peacefully in his sleep on April...