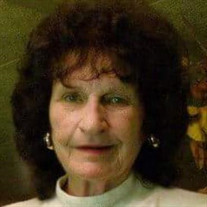 Gwen was born February 15, 1932 to Ethel and Clyde Hegwer, in Casper, Wyoming. Being the only daughter with 4 brothers, her mother was looking forward to dresses, ribbons, and Shirley Temple-esque performances. She was an exceptionally bright girl; dancing, singing, and reciting came naturally. At five years old, she went on the campaign trail for Franklin Delano Roosevelt, wowing huge crowds with memorized speeches of more than 5,000 words. To her mother's dismay, Gwen was somewhat of a tomboy. She loved hanging out in the chicken coop, roughhousing with her brothers, and executing elaborate tricks on her pony. She never missed an opportunity to show off for her daddy. He would take her with him and prompt her to sing such favorites as "Home Me the Way To Go Show" and "Say Say Oh Playmate". She even sang "Happy Trails" to Gene Autry's cousin. One day, Gwen's best friend Sue rushed over excitedly; there were airmen in Roswell. The Artesia, New Mexico teens took the 20 mile trip to check it out and flirt. There, Gwendolyn was swept away by a handsome airplane mechanic, Donald Earl Reddekopp. Her mother was traumatized when they ran away and got married. Dropping her performances and choosing family over fame, Gwen followed Don to Baltimore, Maryland. Patricia Joann Reddekopp was born July 13, 1949 as her dad was being shipped overseas to fight in the Korean War. The girls went back to Artesia until Don was discharged from the Air Force, then on to Oregon for the little family where Don became a timber faller. In Eugene, Oregon, September 22, 1952, Catherine Dawn joined the group. Michael Glen became the first and only son as a birthday present for his momma February 15, 1955 in Redding, California. They then moved to Grants Pass, Oregon, where they stayed for several years. This is where Brenda Elaine was born on October 10, 1957, the baby sister. Throughout her life, Gwen was a devout Christian. She was a very active member of the Christian Women's Club, singing in the choir at funerals and weddings. Her contralto voice was sought after, keeping her very busy. In the 1960's, while clearing the right of way for Highway 138, the family relocated to Glide, Oregon. Home. Gwen worked as a waitress in many popular restaurants around Roseburg. Her joie de vivre was contagious. She was a favorite friend, the life of the party, and always ready to enjoy each moment. After her divorce from Don in the early seventies, she spent many hours enjoying her grandchildren, teaching them her love of life, the beauty of the seasons, a love of books, musicality, patriotism, and laughter. In 1982, Gwen met Larry Cole, a handsome local man who was going through some hard times. Forgetting every other suitor, she was smitten. They shared many of the same loves, including being in the mountains, singing, the love of the Lord, being surrounded by family, laughter, pets, and above all, love. On one of the many mountain drives, Gwen found a house for sale on Anita Lane. She was enamored. In the mountains, surrounded by the forest's beauty, it was the perfect roost for her. She settled right down. As the years went by, Gwen was content with one trip to town per week. Her busy days were done. She spent her days enjoying her pets, reading, watching movies, keeping abreast of current events,and anticipating visits from her big, loving family. She was her family's source of information, always counted on to be right near the phone as their medical dictionary, phonebook, cookbook, counselor, champion, and friend. Google is proving to be a poor substitute. Gwen is survived by her husband Larry; her children Patty Busch, Mike and Brenda Reddekopp, Cathy and Howard Sweet, and Brenda and Terry Cooley; her grandchildren Michael and Tiffany Richardson, Catrina and John Gunderson, Stacy Olson, April and Jesse Miller, Amber and Matt Gaddy, Bethany and Trevor Ison, Gabe and Devinn Reddekopp, Will Reddekopp, Chad and Sarah Cooley, Nathan Cooley, and Carissa Cooley; her great grandkids Josh, Tyler, Rhiana and Aaron, Lars, Seth, Tirah, Isaac, Mahayla, Aaliyah, Elijah, Cole, Audrey, Landon, Cody, Cyller, Caidyn, Christian, Cassadee, Gabriel, Brooklyn, Caleb, Eve, Anessa, and Layla; an extended step family Bonnie Jo, Russ, Lori, Kathy, and Wulff; and her beloved Bella Ballerina. Gwendolyn Joann Hegwer Reddekopp Cole will be cremated and laid to rest on Anita Lane surrounded by her pets. Home to stay. A Celebration of Life will be held on Saturday, October 29, 2016, at 1:00 pm at her home.

Gwen was born February 15, 1932 to Ethel and Clyde Hegwer, in Casper, Wyoming. Being the only daughter with 4 brothers, her mother was looking forward to dresses, ribbons, and Shirley Temple-esque performances. She was an exceptionally bright... View Obituary & Service Information

The family of Gwendolyn J. Cole created this Life Tributes page to make it easy to share your memories.