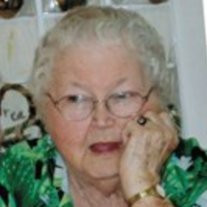 Helen Jean Shew December 16, 1923- August 6, 2013 Helen Jean Shew was born on December 16, 1923 in Newport, Oregon to Harry Malcolm & Helen Mar (Grieg) Smith. She passed away at the age of 89 on August 6, 2013 in Corvallis, at her foster home under the loving care of Chris Beauchamp, owner of Joanna’s Foster Care, and her furry friends, Chloe, Chase & Lily. Jean married Clarence C. Shew on July 3, 1943 in Corvallis, Oregon. They have three children, Thomas (Carolyn) of Albany, Richard (Trina) of Eagle Creek and Jane (Elwin) Callahan of Philomath. She was also blessed with 10 grandchildren, 13 great grandchildren and 5 great-great grandchildren. Jean was preceded in death by her husband in 1984 and her brother, Robert (Bob) Smith in 1969. Jean is survived by her three children and her two sisters Doris Bayless, who resides in Prineville, OR and Shirley Gillett who resides in Dallas, Oregon. Jean’s youth was spent living in the Oregon communities of Newport, Yoncalla, Sutherlin and Blodgett. She was a 1942 graduate of Philomath High School. Upon completion of high school she was employed as a nanny and worked at Columbia Market in Corvallis until she got married. After her youngest child entered school in 1957, she went to work for Valley Linen in Corvallis. In 1970 she retired and spent her time sewing, crocheting, knitting, quilting, bowling and watching sporting events on TV- her favorite being baseball. She was also a volunteer driver for Meals on Wheels for many years. Jean was an honored lifetime member of the Philomath Frolic and Rodeo Association for her volunteer work for the association. Jean was an active member of the Philomath Rebekah Lodge #73 since 1950 and the fraternal organization of the Degree of Honor #117 since 1943. She held numerous offices in each lodge including Oregon’s Grand Matriarch for the Rebekah Lady’s Encampment Auxiliary in 2006-2007. She was very proud of her lodge projects, one of which included collecting teddy bears and presenting them to the Doernbecher Children’s Hospital in Portland at the end of her Matriarch reign. Jean was also very proud of her thimble collection. Through some of her own travels and those of family and friends she accumulated nearly 300 thimbles from all over the world. Jean requested a graveside service only. Marsha Gulick, Chaplain for Benton Hospice Service will officiate. Services will be held on Friday, August 9, 2013 at 11:00 at Oak Lawn Memorial Park, 2245 SW Whiteside Drive in Corvallis. In lieu of flowers, Jean requested that memorial contributions be made in the name of her great granddaughter, Courteney Amidon to Doernbecher Children’s Hospital Foundation, 1121 SW Salmon St. Suite 100, Portland, OR 97205.

The family of Helen Jean Shew created this Life Tributes page to make it easy to share your memories.