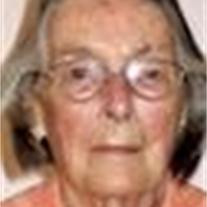 Corvallis resident Hope Wallace Millar Scrogin died peacefully in her sleep at Conifer House Residential Care Facility. Born in Clinton, Iowa, she spent her early childhood in Ludington, Mich., where her father, Frank Estes Millar, was superintendent of schools. Hope inherited her father’s intelligence, strong will and physical energy. Her mother, Jessie Hope Wallace, inspired Hope’s love of music and art, innate graciousness, and engagement with family, friends and the broader community. Hope’s father returned to farming when she was 7. Growing up on a family farm, Hope learned to work hard, to cook and to care for animals and plants, skills she remembered all her life. Family finances denied her the college education she desired, so after graduating from Central High School in South Bend, Ind., she found work as a secretary and office manager. On May 21, 1938, in Upland, Calif., she married Frank Piety Scrogin, the younger brother of her sister’s husband. She and Frank began their married life in California’s High Sierra, where she continued secretarial work for lumber companies. The couple returned to Southern California at the end of World War II, settling in Whittier. There Hope worked as an administrative assistant, and later as a freelance typist and editor, while increasing her involvement in community affairs. The Girl Scouts, the Hospital Auxiliary, and the League of Women Voters all benefited from her talent for organization and management. Eventually, Hope focused her efforts on support for public libraries, which she called “the people’s university,” the source of her impressive self-education. She served on the Whittier Public Library’s Board of Trustees, and helped found the Friends of California Libraries. She and Frank built their retirement home in Sonoma County. There she began genealogical research that resulted in a multi-volume typed manuscript of narrative family history. After Hope and Frank moved to Corvallis in 1986, she continued her family history project while remaining an active volunteer for the Greenbelt Land Trust, the Unitarian Universalist Fellowship of Corvallis, and the Friends of the Library. Hope was preceded in death by her husband, Frank, on Feb. 15 of this year; three siblings who died in early childhood, Ranald, Janet and Margaret Annette Millar; her sister, Miriam Millar Scrogin; and her brothers Frank, Ansel, Northrup and Robert Millar. Survivors include one daughter, Margaret Scrogin Chang of Williamstown, Mass.; a son-in-law, Raymond Chang; a granddaughter, Elizabeth Chang; three great-grandsons; 13 nieces and nephews; and numerous great-grand-nieces and -nephews. A celebration of life will take place at 2 p.m. Saturday, Sept. 5, at the Unitarian Universalist Fellowship of Corvallis, 2945 N.W. Circle Blvd. Memorial contributions can be made to the Friends of the Corvallis-Benton County Public Library, 645 N.W. Monroe Ave., Corvallis 97330, or to a library of choice. Inurnment was at Oak Lawn Cemetery.

The family of Hope Scrogin created this Life Tributes page to make it easy to share your memories.