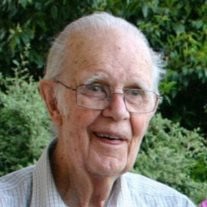 May 8, 1916 — March 8, 2014 Howard Clinton Passmore Sr., 97, of Corvallis gently passed away on March 8, 2014, at His House, a group elder care home in Philomath where he resided his final four months. For most of the past 30 years, he lived in his own home, next door to family. Howard enjoyed being surrounded by three generations of his family during his last days. Born on May 8, 1916, in Furnace Run, Pa., and raised in Kittanning, Pa., he was the son of Warren Leslie Sr. and Estella Luella Kness Passmore. He and his beloved wife, Thelma Florence Walter Passmore, who preceded him in death, raised their two sons and lived for many years in Wallingford, Pa., before moving to Corvallis in 1983 to be closer to family and to experience the milder Oregon climate. Howard Passmore was a graduate of Grove City College and received a master’s degree in chemical engineering from the University of Michigan in Ann Arbor. He was employed for 32 years by the Sun Oil Company in Markus Hook, Pa. In the early 1950s he was chosen to develop applications for using the first commercial computer, an IBM 650, in scientific computations. He served for many years as a trustee and treasurer for Third Presbyterian Church in Chester, Pa., and as a Boy Scout leader. Once in Oregon, he and Thelma joined First Presbyterian Church in Corvallis, where they enjoyed the worship services, fellowship, shared meals and music — especially the jazz band. Following his retirement in 1971, Howard continued to enjoy many hobbies and interests, and kept developing new ones. He and Thelma made a great team as ballroom and square dance partners, and as volunteers delivering meals for Meals on Wheels. Howard excelled at candle making, throwing pottery, silk-screen printing card designs, making chocolates, and, in his later years, line dancing at the Corvallis Senior Center, seeking food and recipes for healthy living, and growing tomatoes, sprouts, kale and kombucha. He became an ardent fan of Oregon State University baseball, listening to games on the radio or watching them on television, clipping out articles from the Gazette-Times, and calling family to remind them when a game was about to start. Howard’s final new interest was reading books about heaven. His two sons, their wives, children, spouses and grandchildren survive him: Howard Clinton Passmore Jr. of Ocean Township, N.J., his wife, Irene Wrigley Passmore, and daughters Lisa Passmore and husband, Glenn Schuster, of Montclair, N.J., and Heather Bliss and husband, James Bliss, of Ocean City, N.J.; and Larry Walter Passmore of Corvallis, his wife, Cathryn Rose Holderread Passmore, and their daughter, Erica Kalisch, and her husband, Martin Kalisch of Bad Dürrheim, Germany. Five great-grandchildren who adored their great-grandfather also survive: Kaya and Chloe Schuster, Aaron Bliss, Noah Kalisch, and India Kalisch. Howard’s youngest brother, Warren Leslie Passmore Jr. of Basking Ridge, N.J., passed away five days after Howard, on March 13, 2014. Exactly seven years earlier, middle brother Irvin Passmore of Beaver Falls, Pa., died on March 13, 2007. Services will take place at 2 p.m. March 28 in Dennis Hall of First Presbyterian Church in Corvallis. Memorial contributions can be made to the church, designated for “Passmore Memorial.” All donations will be applied to the restoration of the church’s historic Povey stained glass windows.

The family of Howard Clinton Passmore created this Life Tributes page to make it easy to share your memories.