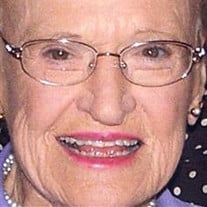 Oct. 16, 1922 – May 15, 2015 Iona Louise Baker Seitz of Corvallis died May 15. Iona Louise Baker was born on Oct. 16, 1922, the second of six children of Riley and Margaret Baker. Her family moved to Miles City, Montana, when she was 5 years old. She would go on to graduate from Custer County High School in that same town, where she met Daniel Seitz. She was married to him for 60 years before his passing in 2006. She graduated from nursing school in 1944, and served at the Seattle Marine and Naval Hospital until the end of World War II. After the war, she and Dan were married and settled in Yakima, Washington, where they raised a family of three boys, Larry and twins Jon and Jay. Iona left her nursing career in 1956 to start a business of her own as an electrolysist. This was a successful business that allowed Iona time to both work and raise a family. In 1984 she and Dan retired. They enjoyed seeing their grandchildren, as well as spending the cold winter months, in Indio, California. In 2005, she and Dan moved to Corvallis to be near Jon and Jay. After Dan’s passing, Iona moved to the Regent, where she enjoyed Wii bowling, beanbag baseball, and playing Rummikub and Skip-Bo with her family. She is survived by brothers Ray Baker of Miles City and Bruce Baker of Selah, Washington; her sons, Larry (Gayle) of Lacey, Washington, and Jon (Leslie) and Jay (Suzanne) of Corvallis; 11 grandchildren; and 11 great-grandchildren. A funeral Mass is set for 10 a.m. Saturday, May 30, at St. Mary’s Catholic Church, Corvallis. Private inurnment will take place at Oaklawn Cemetery.

The family of Iona Louise Seitz created this Life Tributes page to make it easy to share your memories.