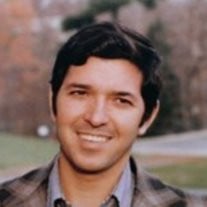 Iraj Motazedian April 21, 1948- September 15, 2013 Iraj Motazedian died of kidney cancer on September 15, 2013, at the age of 65. Iraj was born in a mountain village near Shiraz, Iran in 1948. He completed his bachelors degree in Agronomy and Horticulture at Pahlavi University (in Shiraz). During college he married his wife Nourieh and two years later they had their son Vahid. Iraj was accepted to the graduate school at University of Nebraska-Lincoln, where he completed his masters degree in Range Management in 1979. He moved the family to Corvallis Oregon, where they had their daughter Tahirih, and where he earned his PhD in Rangeland Resources at Oregon State University in 1984. He was offered a full-time position at OSU upon graduation, but chose instead to move his young family to Zimbabwe to help farmers in rural impoverished regions. In 1989 he returned to Corvallis to accept a full-time faculty position in the Crop and Soil Science Department at OSU. Iraj was a man of countless self-taught talents. He had an inquisitive mind and an instinctive understanding of how things work, which allowed him to learn things simply by thinking about them. He was a gifted carpenter, and has built a great deal of fine furniture for friends and family over the decades. He mastered electrical work, auto mechanics, home restoration, plumbing, cooking, design and craftsmanship, and every other job that houses, kids, and cars can send your way over the course of forty years. He always worked without instructions, plans, manuals, or blueprints—all he needed were his mind and his hands. In his spare time, he indulged his great love of nature; he loved to camp and hike and climb mountains (Jefferson, South Sister, and Rainier, among others). He was a seasoned world traveler, having spent extensive time in Nigeria, Zimbabwe, Israel, Taiwan, Greece, England, Spain, Netherlands, India, Guatemala, Honduras, Nicaragua, Turkey, Armenia, and Afghanistan. One of Iraj’s most remarkable and enviable qualities was how effortlessly he achieved a perfectly balanced life. He was completely present in every aspect of his life, and always made everyone around him happy—bosses, coworkers, family, friends, neighbors. He was a loving father who always had time for his kids— whether he was setting up boxes in the driveway to teach them to parallel park, helping them practice soccer drills, or assisting them with their homework. He was an affectionate husband who constantly strove to make his wife’s dreams come true—from installing an indoor hob tub and walk-in closet to building her dream kitchen. He was a true friend to everyone who crossed his path. Any friend only needed mention that they were having a problem with their bathroom or skylight, and Iraj would show up with his toolbox and his glowing smile to fix the problem. Nothing made him happier than serving others. Iraj was a passionate member of the Baha’i Faith, and his faith pervaded every aspect of his life. As a Baha’i, he was dedicated to the spiritual betterment of the world, and he lived his life according to the Baha’i principles of service to humanity. He was a dedicated employee at Oregon State University. For 25 years he worked as a Seed Certification Specialist in the Oregon Seed Certification Service. He provided leadership for the seed inspection program in the region, he helped to develop new inspection programs, and he played a vital role in the Oregon certified seed program. His coworkers speak enthusiastically about his extremely strong work ethic, his engaging friendly manner, his firm sense of fairness, and his ubiquitous happy smile. Iraj was passionately committed to helping farmers not only in the Pacific Northwest, but the world over. He specifically went into this field for the purpose of advancing agriculture in developing countries, to help feed the impoverished people of the world. He spent three years in Zimbabwe, setting up sustainable agriculture systems in rural regions. During the last decade of his life, he volunteered his services to the USDA, USAID, and Winrock International programs and spent extensive time traveling to rural regions in India, Guatemala, Honduras, Nicaragua, and Armenia, to help local farmers maximize their resources to better feed their people. In 2010 he spent six months in Kabul, Afghanistan as part of a USDA convoy of agriculture specialists. Iraj had originally planned to volunteer his services there for a few years, because the need in that besieged region was so great. But he was forced to return home early after he was hospitalized for what were likely the early effects of cancer. He was officially diagnosed with kidney cancer later that year, in 2011, but he continued working full-time until two months before his passing. He did more in his lifetime than most of us could do in five lifetimes. He lived every moment of life to the fullest, and he was respected, admired, and beloved by all whose lives he graced. Everyone who knew him could attest to his ever-present radiant smile of shiny white teeth, which he managed even during his last moments of life. Iraj is survived by his wife (of 42 years) Nourieh (of Corvallis, OR), his son Vahid and wife Catherine and daughters Nina and Parisa (of San Mateo, CA), his daughter Tahirih and husband Karl Hansen (of New Haven, CT), as well as countless relatives and friends who love him dearly and will never forget him. The funeral service will take place on Thursday, September 19, 2013, at 1:00pm at Locke Cemetery, 99W and Lewisburg Road; followed by a reception at the Dennis Hall, 114 SW 8th Street, Corvallis, from 2:30-4:30pm.

The family of Iraj Motazedian created this Life Tributes page to make it easy to share your memories.