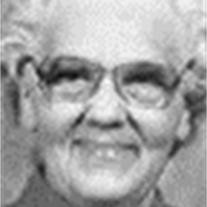 Irene Edith Monroe of Corvallis died Saturday, Aug. 8, in Corvallis. She was 87. Irene was born in Philomath to Charles and Minnie Peek Reynolds in the home of her maternal grandparents at Noon Station. She grew up in Philomath. Shortly before she turned 16, she moved to Corvallis to work for her cousin by caring for her three small children, something she loved dearly. Shortly after her 18th birthday, on Jan. 20, 1940, Irene and Leland James “Jim” Monroe were married in her cousin’s home. The couple made their home in Corvallis, where they lived their entire lives. Jim passed away in 2005, just 10 days before their 65th wedding anniversary. In 1933, Irene’s father was invited to a series of Seventh-day Adventist tent meetings held by Dan and Melvin Vendon. Her entire family attended. Irene and her parents were baptized on March 16, 1934. Her grandparents and younger brothers were baptized later in Academy. As an active member of the Corvallis Seventh-day Adventist Church, Irene organized and ran the local Dorcas Society, where she collected and distributed donated clothes and literature for the needy. In 1985, Irene transferred her membership to the Albany Seventh-day Adventist Church. She loved her work serving others and God, and always made service to God her top priority. To put her three children through Seventh-day Adventist church school, Irene took a job as a cook’s helper at Oregon State University. She worked in the Snell, McNary and Weatherford dining halls for 17 years before retiring in June 1984. Irene loved reading her Bible for many hours each day, and making quilts for family members. She genuinely loved people, and touched the lives of everyone she met—often in life-changing ways—even down to her last days. She was loved and admired by everyone. In addition to her husband, Irene was preceded in death by an infant son, Alan; infant sister, Dorothy; and brothers Charles, who died in Normandy, France, during World War II, and Lawrence and Leonard Reynolds of College Place, Wash. She is survived by her brothers Clarence and Emil Reynolds of College Place, Wash.; daughters, Sondra Farmer of Portland and Linda Monroe of Corvallis; sons, Dennis of Philomath and Ken of Corvallis; 12 grandchildren, 14 great-grandchildren; and two great-great-grandchildren. A memorial service is pending. Irene’s ashes will be placed next to her husband’s at Alsea Cemetery.

Irene Edith Monroe of Corvallis died Saturday, Aug. 8, in Corvallis. She was 87. Irene was born in Philomath to Charles and Minnie Peek Reynolds in the home of her maternal grandparents at Noon Station. She grew up in Philomath. Shortly... View Obituary & Service Information

The family of Irene Monroe created this Life Tributes page to make it easy to share your memories.